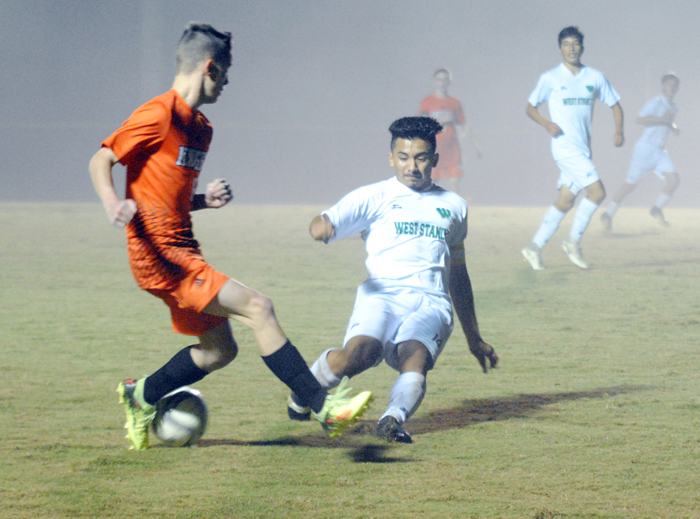 West Stanly senior Leo Martinez goes for the slide tackle in the first half of Tuesday's playoff game at North Davidson. (Photo by Charles Curcio).

West Stanly’s 2018 men’s season began with two losses and a tie as the Colts struggled to find players for the team, according to head coach Ivan Osorio.

The Colts won five of the team’s next six games and challenged for the Rocky River Conference championship, finishing third with one more loss than the conference title winners from East Montgomery.

West earned an at-large bid into the playoffs and were the only lower seed in the Western Region to win in the first round of the 2018 state playoffs.

After being the first Colts team to advance to the second round with a win on the field, West went on the road Tuesday night against another team looking to continue setting school history.

North Davidson entered Tuesday’s game with 18 wins in 22 matches, improving from last year’s win total of eight. The Black Knights had never advanced to the second round with a win before this season and looked to move on to the third round also for the first time in school history.

In front of a raucous crowd on a field enveloped by patches of fog, the Colts and Black Knights battled through 80 scoreless minutes, needing overtime to settle matters. West scored early in the first overtime but North Davidson rallied for two goals including the game winner with 1:58 left in the final OT period, earning a 2-1 win.

West (12-7-1), building on momentum from Saturday’s win in penalty kicks, started the game strongly maintaining possession. Jayden Bingham had the best first offensive chance for either team, launching a shot for the Colts which was stopped by the North Davidson keeper.

The Black Knights (19-4) started to generate offense in the middle part of the first half. North Davidson’s Jake Dawson missed a wide-open net after West keeper Jairo Marquez was caught out of position. Marquez made the save on a shot from Yahir Mora-Leal in the 19th minute. Minutes later two more shots by North Davidson missed the net, with one going just high.

In the 27th minute, Aldo Cruz, the leading goal scorer for West, nearly added his 33rd of the season following a rebound off a shot from Brandon Edge, but the play was ruled offsides.

Noel Medina Ponce also came close to notching the first goal of the game in the 34th minute, sending a shot just high. The game went to halftime scoreless.

North Davidson’s deeper bench started to play into the game in the second half. The Black Knights were able to sub more in the game, and began controlling possession of the ball.

In the 51st minute, a free kick on West’s goal was deflected away from the net by Marquez. Four minutes later, Marquez was forced to make a diving save to keep the game scoreless.

Shots from Justin Raver and Ahmad Bacchus for the Knights were turned away by the Colts midway through the second half.

West had chances as well in the second half. Cruz made a long run to goal and shot just wide in the 65th minute. Two minutes later, a laser off his foot barely missed the upper left corner of the goal.

Play began to get more physical as the game wore on and temperatures dropped. Hector Jaramillo received a yellow card with 11:07 left in regulation time.

Marquez continued to turn away chances by North Davidson, making saves in the 74th and 77th minutes on a long shot and a free kick.

The game went to the first stage of overtime in NCHSAA playoff soccer, two 10-minute periods played fully no matter how many goals are scored.

West broke onto the scoreboard in the 84th minute of the match. Off a corner kick, Cruz headed the ball into the back of the net, putting the Colts up 1-0 with 6:42 on the clock.

North Davidson amped up the offensive pressure but did not break through until the second of the 10-minute periods. At the 5:08 mark, Roberto Delgado sent a shot which deflected off Marquez and to the foot of Landon Perry. The senior and team captain kept the Black Knights in the game with a goal, tying the match 1-1.

Cruz had a late chance in the second OT, making a long run but his pass was just out of the reach of a teammate on the left side of the net.

Marquez then made a miraculous save off his leg on a North Davidson chance, deflecting the ball barely past the post to his right.

With 14.5 seconds left in the second overtime, a foul and yellow card to West set up a long free kick for North Davidson. The kick went on goal and Marquez punched it away to his right.

The match moved on to the next stage, two five-minute periods with the golden goal rule in effect, meaning the next tally decides the outcome.

Neither team generated many chances in the third extra frame, but the fourth was different.

Cruz started the final sequence of events by nearly netting the golden goal. The senior passed into the middle of the field and the shot by West struck the crossbar. The ball caromed off the bar and past the Colts’ forward lines, giving North Davidson a breakaway. Marquez moved up to try and deflect the ball away, but the Black Knights’ Ethan Wiles wound up with the ball on a breakaway on the empty net. The junior made no mistake and buried the ball in the net for the game-winning goal.

“We had a lot of heart and wanted to win the game,” Osorio said after the match. “We don’t have a lot of players but the ones we have give it their all … we were running out of legs at the end.”

“When you go out and get a good win, it builds character in a team. It gives the younger guys something to look forward to,” Osorio said.

Osorio also said Tuesday’s match could have gone either way, adding, “that’s how it is in the playoffs. Someone’s going to win; in a tough game like that, it takes only one little mistake.”

Regarding the season, Osorio said he felt after the battle for the RRC title he felt the team “was building on something special” heading into the playoffs.

“If 12 or 13 players are willing to come out and practice, work hard, you can see what happens,” he added.