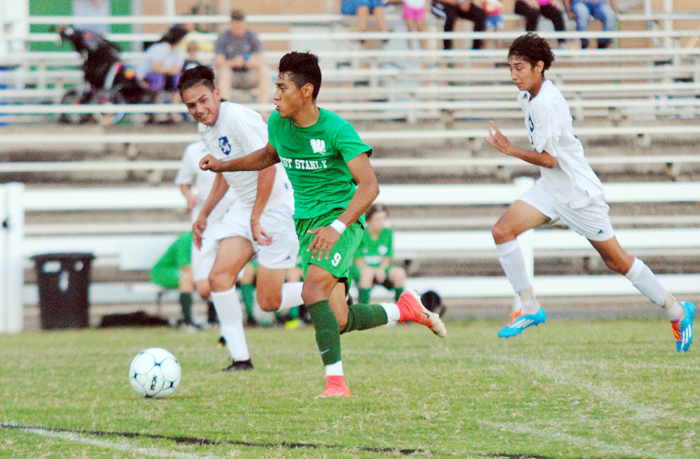 West Stanly's Aldo Cruz outraces two defenders in a home game this season The senior scored two second-half goals to help the Colts to a win in penalty kicks in the first round of the state 2A playoffs Saturday. (File Photo)

West Stanly’s soccer team had not reached the second round of the 2A state playoffs since a decade ago. In 2008, West earned the No. 1 seed from the Rocky River Conference and had a bye in the first round. The Colts lost 1-0 at home to East Davidson in overtime.

This year, the Colts earned the No. 27 seed out of 32 teams in the West region of the 2A state playoffs, traveling Saturday to take on the No. 6-seeded Hendersonville Bearcats.

Trailing 2-0 late in the game, the Colts scored twice and battled through two 10-minute and two five-minute overtime periods to reach penalty kicks. In the shootout, West bested Hendersonville (12-4-2) 6-5 to advance to the second round with a victory.

The win for West (12-6-1) was the first time in school history a Colts men’s soccer team had advanced to the second round with a win on the field.

Aldo Cruz scored both regulation goals for West, the first coming with 10 minutes left in the second half with the assist to junior Arturo Zelaya.

Six minutes later, Cruz found the back of the net again, also from Zelaya, to send the game to extra time.

In the penalty kicks, West keeper Jairo Marquez, a junior, made saves on three attempts, while sophomore Noel Medina scored the winning PK.

Winning was amazing but “nerve-racking considering we were going up against a tough opponent,” West head coach Ivan Osorio said. “The guys played until the end and really believed they could win, especially after Aldo’s first goal.”

Osorio said West “played a phenomenal game and it took a lot of team effort to take the win considering we only had a roster of 13 players.”

The West coach also noted it helps in order to create a rally of that nature “to have a player like Aldo whom currently sits with 32 goals this season.”