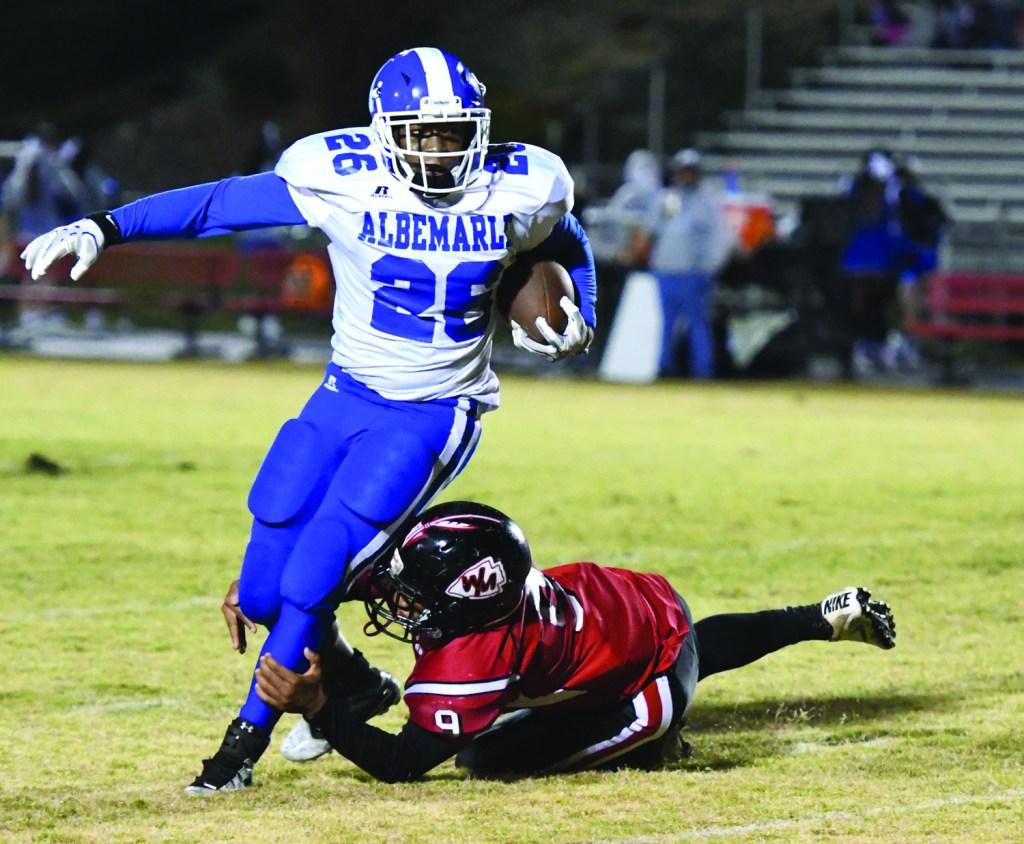 With the impending merger of the two high schools in Montgomery County, East and West Montgomery, the two athletic programs will soon become one.

That merger signifies the end of a long-standing rivalry between the football programs of Albemarle and West Montgomery, who have played 28 times over the years including one playoff game.

On Thursday night, the Bulldogs visited the Warriors’ football stadium and scored 21 unanswered points in the final 14-plus minutes of the game for a 41-21 win.

Thursday’s game marked the return of Albemarle’s leading rusher to the field from injury, Eli McCall. In the win, McCall rushed for 67 yards on 18 carries with two rushing touchdowns. For the game, the Bulldogs had 186 net yards on 45 carries, including 33 yards lost on a bad punt snap.

The victory may have proved costly, however, as starting quarterback Manaurian Hall, who was 4-of-6 through the air for 70 yards and a touchdown, left the game just before halftime with an injured ankle. Backup QB Levi Nall completed two passes in the second half, including the go-ahead score of a 30-yard touchdown strike to Antonio Burns.

Defensively, Albemarle (4-6, 4-3) also got big games from several players. Christian Watkins led the way with nine tackles and a sack while Adrian Little and Brandon Christian had six tackles each. Burns also returned a late interception, the only turnover of the game for either side, for a touchdown.

Albemarle limited Warriors running back Payton Coble to 88 net yards on 20 carries with two touchdowns. West Montgomery (4-7, 3-4) also threw for 95 yards and a touchdown on 3-of-8 passing.

The first miscue of the game gave the host Warriors the early lead. After stopping West Montgomery on its first drive, Albemarle went three-and-out and was forced to punt. The snap went well over the head of Nall as he fell on the ball at the Bulldogs’ 4-yard line. Two plays later, Coble barreled over the line for the touchdown. Marvin Benitez tacked on the extra point and put the Warriors up 7-0.

Albemarle responded with an 11-play, 63-yard scoring drive to tie the game, taking up the final 6:07 of the first quarter and eight seconds of the second period. Manaurian Hall found Christian for a 34-yard strike downfield on 3rd-and-15, then later converted on a fourth-down play. On fourth and 16 from the Warriors’ 27, Hall threw a perfect strike which Christian caught in stride in the end zone for a touchdown. Monta Hall’s point after tied the game 7-7.

The Bulldogs took the team’s first lead of the contest on its next drive, going 48 yards in eight plays, all on the ground. McCall finished the drive with a five-yard touchdown run; Hall’s point-after put the visitors up 14-7.

West Montgomery responded with a 10-play, 74-yard scoring march down the field. It was finished with a Chappell to Chappell play; quarterback Chase found wide receiver Dashawn for a 28-yard touchdown strike. Benitez’s point-after attempt went into the back of the line and fell short, leaving the Bulldogs ahead 14-13 with 1:10 left in the first half.

Albemarle gained momentum going into the halftime locker room with a scoring drive over the final minute-plus of the first half but the drive was costly. Hall had his foot pinned underneath him between two West Montgomery tacklers while scrambling for a first down. Three plays later, Julius Smith took a handoff and avoided several would-be tacklers to work his way into the end zone for a touchdown. The point-after put the Bulldogs up at halftime, 21-13.

“I had good blockers…I saw the hole and I took it,” Smith said about the touchdown.

Despite having few penalties in the game (six for 55 yards), one in particular against Albemarle kept the Warriors’ first drive of the second half alive. Watkins sacked Chase Chappell, but a 15-yard face-mask call kept the West Montgomery offense on the field. The Warriors QB connected three plays later with Noah Gillis for a 60-yard pass down to the Albemarle 5; Coble then scored two plays later from two yards out. Chase Chappell then ran in the two-point conversion for a 21-21 tie.

It did not take long for Albemarle to respond and take the lead for good. Starting at the Bulldog 44, Albemarle drove 56 yards in six plays, including long runs from McCall and Josh Smith. Nall then found Burns on an acrobatic catch on the left side of the end zone for a 19-yard touchdown. The PAT put the visitors up 28-21.

West Montgomery tried to answer with a long drive at the end of the third stretching into the final period. Coble lumbered 23 yards down field on a third down and a face-mask penalty put the Warriors just out of the red zone with a first down. However, Albemarle’s “Oak Tree” defense got two tackles for a loss and pressured Chappell to throw the ball into the turf on fourth down to take over on downs.

Albemarle went up two possessions with a five-minute, 10-play, 78-yard drive. Nall found Christian for a 30-yard pass, then Julius Smith converted a 2nd-and-28 with a 30-yard run along with 15 extra yards on a penalty against West Montgomery. McCall converted a fourth-down run at the 14 for seven yards, then ran the final seven of the drive into the end zone. Hall’s point after put Albemarle up 35-21.

The Warriors went to the air to try and get back into the game, but Chappell’s pass was picked by Burns at the Albemarle 46. Burns then raced down the visiting sidelines 54 yards for a pick-six touchdown, putting the game effectively out of reach.

“Julius single-handedly gave us momentum,” Albemarle head coach Richard Davis said regarding Smith’s touchdown run to end the first half. “That was all heart and will and I think our team fed off that coming out the second half.”

Davis said the Bulldogs played as a team in the win “not worrying about who gets the shine or the credit.”

Regarding the team’s passing output, the highest as a team this season, Davis said having the extra time helped in preparing to play. He added Albemarle “worked all week” on getting the ball out quick getting his quarterbacks to “make a decision and let it go.”

With the win, Albemarle finishes fourth in the conference at 4-3 overall, the first season with a conference record over .500 since 2013.

“We get to go into (the postseason) with a little momentum. Last year, we went in licking our wounds a little bit and took those wounds to Pamlico. Now, we’re going in on a high and that’s what you want to do,” Davis said.

Both teams will learn their separate playoff fates on Saturday when the state football playoff brackets are scheduled to be released.