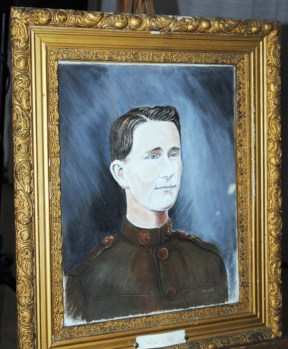 This portrait depicts Walter B. Hill, for whom American Legion Post 76 is named. Hill died shortly after the signing to end World War I. (Photo by Charles Curcio) 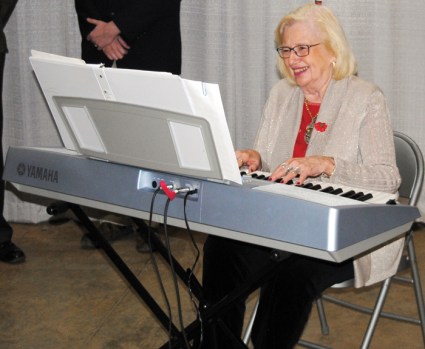 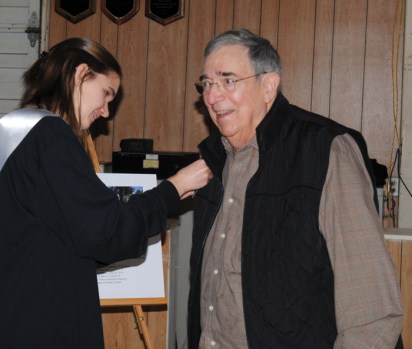 Brittany Cozort pins a poppy onto the vest of Gene Starnes before the Armistice Day program at the Stanly County Fairgrounds. (Photo by Charles Curcio) 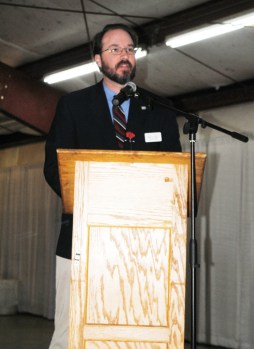 Charlie Knight, curator of military history at the North Carolina Museum of History in Raleigh, was the featured speaker. Knight presented several historical facts about World War I and connections around North Carolina. (Photo by Charles Curcio) 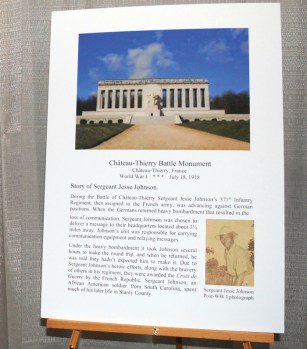 An end to hostilities in World War I first began on the 11th hour of the 11th day of the 11th month 100 years ago Sunday.  The end of the “war to end all wars” started when the Armistice of Compiègne was signed in the railway carriage of French marshal Ferdinand Foch on Nov. 11, 1918.

The day has now come to be known as Armistice Day in France and is celebrated in the United States as Veterans Day. Veterans were among attendees at a presentation Sunday at the Stanly County Fairgrounds.

Presented by the Stanly County Historical Society, veterans, families and members of the military and civilian communities gathered to learn more about North Carolina’s role in World War I while also saluting veterans.

Before the ceremony, Charlotte Maness played a medley of World War I-era songs while also playing the U.S. national anthem to start the program which all in attendance joined in to sing together.

Also beforehand, a slideshow presentation with names and pictures of those from Stanly who served in WWI ran, complied by Stanly County American Legion Post 76 member Johnny Holt.

An Albemarle native, retired Air Force Maj. Gen. Robert Stonestreet served as master of ceremonies. Stonestreet retired in 2014 from the North Carolina Air National Guard after having served in the military for 44 years. He served in both Operation Desert Storm and Enduring Freedom.

Stonestreet introduced keynote speaker Charlie Knight, the curator of military history for the North Carolina Museum of History in Raleigh. Knight used a slideshow of historical facts and profiles to illustrate how WWI affected the lives of North Carolinians as well as the world.

Knight talked about WWI as being the first modern war, dominated by trench warfare. He illustrated the brutal conditions of being in trenches while the style of war included elements such as poison gas. Even today, parts of France are hazardous to human health because of the mustard gas used.

WWI started in 1914 and the United States did not enter until April 1917. When the war ended 18 months later, nearly 9 million soldiers were dead. Germany and Russia lost close to 2 million soldiers each, Knight said.

For the United States, the losses were especially intense considering the short amount of time it had been in the war. Even shorter, Knight said, was the time when American units actually got into “really heavy combat” which came around July 1918. The U.S. lost approximately 126,000 soldiers, while another estimated 234,000 were wounded in a five-month period.

“You can imagine what these men and women were up against on these battlefields; it was a defining moment in United States history. There was not a household who was not somehow affected by the war,” Knight said.

Beyond the combat affecting the number of soldiers who died were those who succumbed to the flu epidemic of 1918 as well as the rats, vermin, insects and otherwise poor conditions within the trenches.

In terms of North Carolina, 86,457 soldiers, sailors and others served in uniform in WWI, including 60,822 draftees. A total of 624 Tar Heels were killed in action while 1,542 died of disease. North Carolina also had 3,605 people wounded in action.

Knight presented profiles of several participants in the war in particular, starting with Madalon “Glory” Battle Hancock, a nurse thought to be the first North Carolinian to enter the war. She grew up in Asheville and graduated from the Presbyterian Hospital School for Nursing in New York City in 1905.

She later married British Army Officer Mortimer Hancock and served on the front lines for the duration of the war as a nurse with a British front line unit and later at a hospital in Fermes, Belgium.

Hancock was a unique individual for many reasons, Knight said. She owned a pet rat which she would carry on her shoulder into restaurants in New York City; Hancock also owned a pet ocelot, a type of wildcat.

Until World War II, she was the most decorated woman in history, having received five medals from both Great Britain and Belgium and two from France.

Knight also spoke at length about other famous North Carolinians from the war, including Kiffen Rockwell, who was born in Tennessee but grew up in Asheville.

Rockwell joined the French Foreign Legion in 1914 and was a pilot for the Lafayette Escadrille, a volunteer squadron of American pilots which formed in 1916. The squadron was later the subject of the 2006 movie “Flyboys” starring James Franco.

Knight mentioned Carthage’s James McConnell who was also a member of the Lafayette Escardrille and was shot down twice. McConnell wrote a book on his wartime experience after being shot down the first time titled “Flying For France.”

North Carolina also had two divisions of African-American soldiers to serve in France attached to the French army, the 92nd and 93rd divisions. Knight spoke about Ernest McKissick, who served with the 349th artillery group. His son, Floyd, went on to become one of the first four African-American students to attend the law school at the University of North Carolina at Chapel Hill.

Knight concluded his presentation by saying many soldiers did not come home and are still in cemeteries in France and Belgium while others “are still on the battlefields.” He added “once America entered the war, it tipped the scales in favor of the Allies.”

Attendees also learned about the history of Walter B. Hill, for whom Stanly County American Legion Post 76 is named.

Presented by Post 76’s Holt, attendees learned Hill was born in Big Lick Township in 1888 and was a reporter for the Stanly Enterprise.

Hill worked for newspapers in Greensboro and Winston-Salem before being drafted in April 1918.

Within hours of the signing of the Armistice, Hill was killed in the Ardennes Forest. His body was returned to Stanly two years later for a military funeral.

“In Flanders Field” references red poppies growing on the top of soldiers’ graves, with remembrance poppies becoming a symbol for fallen soldiers. Attendees of Sunday’s program were offered a poppy to pin on their clothes to show support.

McRae talked about the poppies made by disabled veterans, saying when a member of a local veterans service organiation or auxillary offers a poppy, “I hope that you will recall what it represents.”

Many poppies are made by severely disabled veterans, McRae said, noting for many “it’s the only job they are physically able to do.”

Poppies are distributed without charge; however, any money raised through donations are required to go directly to the support of veterans, McRae added.

Before the benediction from Methodist minister and VFW member Rev. Bob Cauble, Maness played a medley of service hymns while attendees who served in the five branches of the military stood and were recognized.