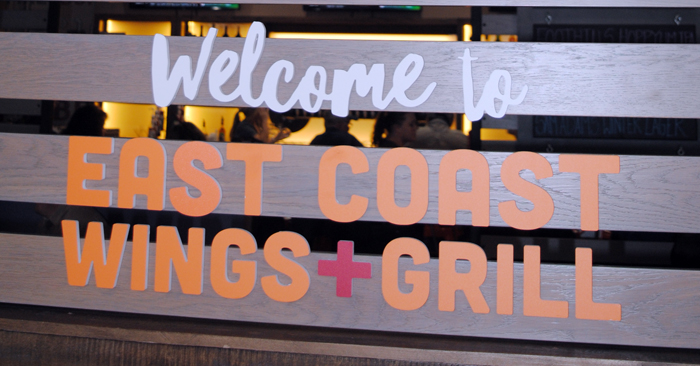 With the growth of the shopping area located adjacent to the Wal-Mart Supercenter on Leonard Avenue in Albemarle, a number of new business have opened up shop in Stanly.

Jeff Sepedi and Terry Kimrey are co-owners of the new East Coast Wings & Grill location in Albemarle. The Winston-Salem based company first opened in 1995 and started franchising locations in 2004.

On Tuesday, following a ribbon cutting with the Stanly County Chamber of Commerce, the store opened its doors and quickly filled with customers.

Sepedi said the company is unique for its dining experience.

“What makes us unique is we create a wing experience in which 60 different combinations a person can put together. You can customize your wings the way you like them. The wings are never frozen, always fresh,” Sepedi said.

Along with wings and burgers, the menu offers salads, wraps, flatbread sandwiches and skillets along with a full bar, craft brews and local wines.

“It give you casual comfort food in an environment which allows you to celebrate. You can eat lunch during the work day, watch the game or celebrate a birthday. Anyone can come together and enjoy good food, good camaraderie,” Sepedi said.

The company, who has a media relationship with Rock 92.3 WKRR-FM in Asheboro, hosted a live remote and meet-and-greet with the stars of the station’s morning show, Chris Kelly and Chris Demm. Fans got the chance to meet the two radio personalities while spinning a wheel to win prizes.

For more images from the event, visit the link below:

(Note: The following story has been updated from a previous version published on Tuesday afternoon.)