Hall: Jack Neel was ‘a wealth of knowledge’

Albemarle and Stanly County has lost another of its long-term public servants.
Jack F. Neel, 88, died Monday after a lifetime of serving the community and its people. 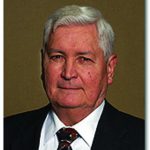 Neel was Albemarle city manager from 1967 to 1985. After a brief retirement, he ran for City Council and won, serving from 1987 to 2013.
Neel was born April 19, 1930 in Bluefield, West Virginia. He grew up in Pearisburg, Virginia, which is where he met the love of his life, Kathryn Hale. The couple married in 1950. They had had five daughters, 15 grandchildren and three great-grandchildren.

Following graduation from Virginia Tech in 1952, Neel served in the U.S. Army for two years. After the military, he returned to Virginia Tech to obtain his master’s in sanitary engineering. Other than Albemarle, Neel was city manager for Tazewell, Virginia and Roxboro, serving two and eight years, respectively.

The work he contributed to the city left an impact on two future city managers and others.

“I had the privilege of working for Jack Neel at the city of Albemarle for a period of 30 years during his tenure as city manager and as a member of the Albemarle City Council,” said Ray Allen.

Allen, who began his career as an administrative assistant in 1981, became assistant city manager in 1984 and was picked to follow Neel as city manager upon his retirement in 1985, said his predecessor gave him the opportunity for his first job in government.

“I learned a great deal from him,” Allen said. “I would say in particular he taught me the intricacies of municipal budgeting. Because of its large enterprise funds in solid waste, water and sewer, and electric distribution, the city of Albemarle has an unusually complex budget for a community of this size. By working with Mr. Neel, I learned how to prepare and present these budgets.”

Ferris said Neel “dedicated his professional life to Albemarle and the other municipalities he served.”

“I was fortunate to work with him for 18 years and he shared with me a great deal about the city of Albemarle, our history and our strong tradition of serving our citizens,” Ferris said.

Councilwoman Martha Sue Hall said she, too, learned much from Neel, in part by sitting beside him for her first eight years on the City Council.

“Jack forgot more than I will ever know about local government,” Hall said. “The man, he truly loved the city of Albemarle and could see not the future — but the things he did years and years ago have built the foundation for what we have right now.”

As a certified engineer, Neel served in the International City Managers Association and ElectriCities. He attended the organizational meeting of North Carolina Municipal Power Agency Number 1 in 1976 and served on its board of commissioners since then, including a term as chairman.

Neel was also a member of Central United Methodist Church for more than 50 years and a member of Lions Club International his entire adult life. He also was a fan of the Atlanta Braves and the Albemarle Bulldogs. He also enjoyed coaching basketball and softball.

Hall called Neel “a wealth of knowledge,” and a person who had “a love and service of his God, he had a love of his country, he loved his college and he loved his community.”

Hall acknowledged the fact that Neel’s death comes just weeks after the passing of another former councilman, Ed Underwood.

“It’s really sad that we’ve lost two folks that really had a love of our community,” Hall said.