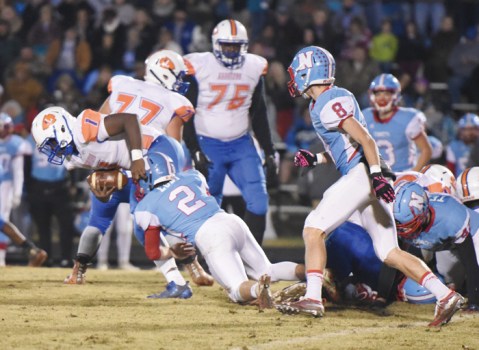 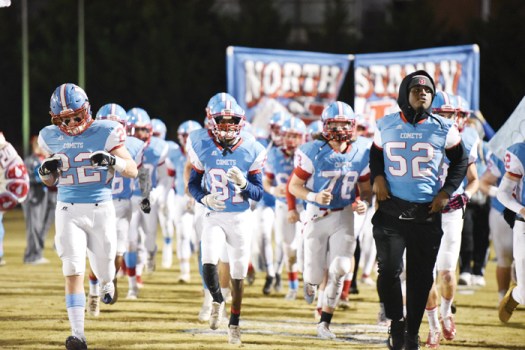 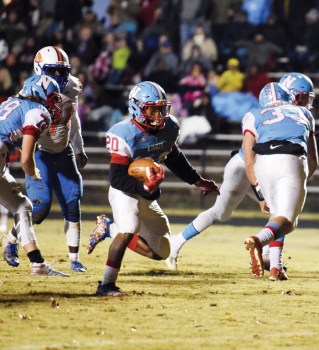 The North Stanly football team was one of the few conference champions in the state playing in the first round of the state playoffs.

Despite finishing with a 9-2 record and winning both the Stanly Cup and Yadkin Valley Conference titles, the Comets landed in the 1AA East as a No. 5 seed and hosted the last team in on the eastern side Friday night, the No. 12. Louisburg Warriors.

North Stanly scored early and often, with a running clock the entire second half, and set school records in a 70-0 blowout win.

The 70 points scored were the second-most ever in school history and set a mark for the largest margin of victory by a North Stanly football team.

The Comets posted a seventh defensive shutout this season in the win and have not allowed points since a 43-8 win over North Rowan. Friday’s shutout was also the third in as many games for North Stanly.

Comets head coach Scott Crisco said he recently spoke to a few other coaches about his team’s identity.

“For a team averaging well over 40 points a game with two good running backs and a quality offense, you would think that would be our identity. Actually, we will go as far as our defense takes us,” Crisco said.

North Stanly (10-2) allowed 60 total net yards of offense in the game against Louisburg (4-8) and posted a defensive touchdown when Carter Terry returned a tipped pass deep in Warrior territory for a pick-six. The Comets limited Warriors quarterback Jaheim Brown to 33 passing yards on 4-of-12 passing. North also limited Louisburg to three first downs in the game and 0-of-10 on third-down conversions.

Offensively, the Comets had excellent starting field position for the majority of the game, starting every drive in the first half inside Louisburg territory. North scored on nine straight possessions with no drive going longer then 56 yards in the game and no drive lasting longer then four minutes.

D.J. Rhone led the ground game for North with 105 yards on eight carries and three touchdowns. His teammate in the backfield, Cameron Davis, added three rushing touchdowns to his school record which now is at 91 for his career. Davis rushed for 51 yards on five carries.

Bailey Baker came up just short of passing the 1,000-yard plateau in passing this season after having a long touchdown pass called back for an illegal block. Baker thew for 92 yards on 6-of-11 passing with two touchdowns strikes to Joseph Benfield.

Struggles by the visitors in trying to punt the football set up the first three touchdowns of the game for North. A bad snap on the first attempt after Louisburg went three-and-out set up Davis’ first touchdown of the night.

Another bad snap on the Warriors’ next drive put the Comets at the Louisburg 30. Four plays later, Rhone scored from 11 yards out.

After the next punt attempt was also bobbled, North scored on a four-play, 26-yard drive and the rout was on.

Louisburg did not get past its own 35 yard line in the first half and only got out to the 40 in the second. The Warriors never crossed midfield in the game.

Crisco said he was proud of his team not playing down to the level of the competition and keeping its intensity.

“We had intensity in the game from the first kickoff to the end. Even when the (subs) went in we kept the same standard on the field. We played to our level, which is what we have been preaching all season,” Crisco said.

The North coach added the win makes a statement about the Comets in the postseason adding “everyone knows the seeding was off. Tonight proved that.” He added the seeding has been “a blessing for us, a rallying cry. They think we are a five seed; the only thing we can do is show them on the field.”

North Stanly will be on the road Friday night at No. 4 Granville Central (8-1). The Panthers finished second in the 1A/2A Northern Carolina Conference.