WOMEN’S SPOTLIGHT: Momma on Points’ story is helping others 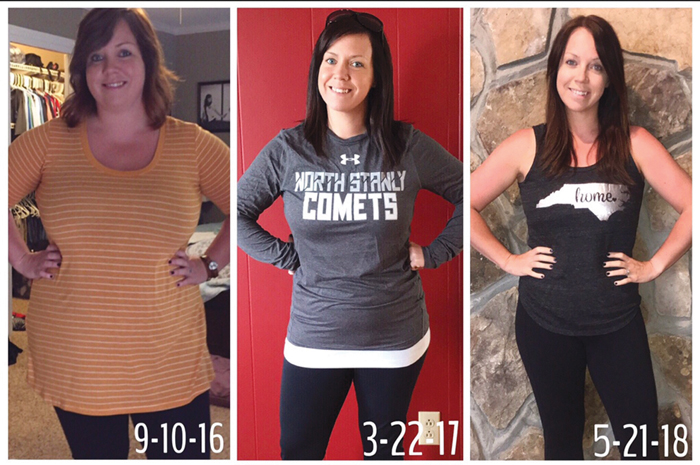 On her Instagram account, Suzanne Carter, a.k.a. Òmomma_on_pointsÓ displays her transformation in having lost close to 100 pounds in a two-year span. (Contributed)

She shares with friends and strangers alike her story of losing close to 100 pounds on Instagram and has just over 4,000 followers on that social media platform.

But Suzanne Carter’s journey to a healthier life with the help of her family, the Stanly County Family YMCA, Weight Watchers and more started just over two years ago.

She said she had gained around 50 pounds with post-partem depression compounding her struggles after the birth of her last child, Cash. Fad diets came and went but none of them ever stuck with her.

That is, until she started Weight Watchers, now known as Wellness that Works or WW for short. Initially, she had joined WW in 2011 to drop 10 to 15 pounds from her first pregnancy, which worked that time.

But with her recent pregnancy, Carter said something changed inside of her; she had the motivation to lose the weight but had “zero energy.”

“This go round was different for me because I had so much I needed to lose and it seemed possible,” Carter said.

Like so many struggling with the problem, procrastination settled in early on in terms of getting healthy. However, when her family, especially her sister, Allison Hudson, expressed concerns about her health, things changed. Hudson is the founder of Will’s Place in Albemarle, a substance recovery center and nonprofit organization.

“She had been at my house and could tell my life was a little upside down. She simply texted me after she left and asked if I was OK,” Carter said.

That text opened up a floodgate of emotion for her; she just opened up and “let it out. I let it all out.”

Two days later, Hudson showed up on Carter’s doorstep clad in workout gear with a WW meal plan in hand. Both went online and signed up on the website, Carter said in part because for her self she “was too ashamed and didn’t think I had the time for meetings.”

A truth in life came pouring through eventually when the pair joined Stanly’s YMCA to walk and workout four to five times a week. In the case of Carter’s sister, she was driving from her home in Charlotte to the Stanly Y over the first two months, in Carter’s words, “to keep me on track.”

After two months, going just became habit, but her sister continued to check in with her to make sure she was staying on the path.

“She literally saved my life. It may sound silly to others who don’t get it but it’s true,” Carter said.

Her sister, who has been sober for six years, inspires Carter daily. She added, “if she can wake up and make the choice to not drink alcohol every single day, surely to God I can do this.”

Staying on a meal plan with a husband who coaches soccer at North Stanly along with three boys playing multiple sports all year long can be tough. The Carters have three sons: Noah, 11, Bronx, 8, and Cash, 3.

“Most of the time, we are at a ball field of some kind. Weeknights are full of games, practices, church and homework,” Carter said.

The temptation of that fast-food drive thru is ever present, Carter said, especially during baseball season. The only way to avoid that temptation is through meal planning.

“I don’t necessarily prep for a whole week, but I do plan. I do best when I shop for weekly meals and work them around our schedule,” Carter said.

Using crock-pot recipes to have a meal ready when the family comes home from a late night is one strategy. Carter called crock pots “heaven sent.”

Being organized about meals was something Carter said she never could see — how other moms could manage, but she added “I had to stop making excuses and start doing it for the greater good.”

By staying organized, not only was she eating healthier, but her family was as well.

Get Up and Get Outside

Exercise is critical to the weight loss journey Carter has been on, turning out to be one of the big benefits as well.

Carter said being able to go outside and play with her three boys is the best part. 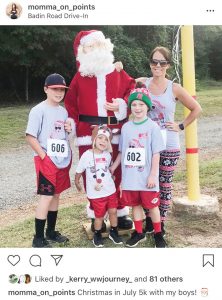 Noah, Cash and Bronx Carter pose with their mom and a Santa Claus after a recent 5K run. (Contributed)

“Teaching them to have healthy habits and active lifestyles is so important,” Carter said.

Her kids are proud of her and have also helped make things easier for her. Because of their competitive natures playing sports, making her lose weight became a competition for them.

“They knew I wasn’t in competition with anyone else, but they wanted me to reach my goals and cheered me along the entire time,” Carter said.

The Carters participated in a number of 5K runs and used monthly goals, which the kids deemed “challenges,” to help her achieve her goals like no sugary drinks for 30 days or a 30-day ab challenge.

Beyond her family, being able to share her success with people online has been a huge positive for Carter’s journey.

Her blog on Instagram has allowed strangers from everywhere around the world to share the fact they were in the same boat she was when she started the weight loss program.

“I love encouraging people to keep going because it’s so worth it,” Carter said.

Going online to post and blog is also part of the daily routine, she said, due in part to the flood of questions she got once others around her started noticing her weight loss. Questions in person and online messages floated around similar themes: what was she doing, what was her secret, what do you eat at this or that restaurant.

“I felt passionate about helping people because I truly wanted them to have the success I was having so I took the time to answer every single person,” Carter said.

Expending an inordinate amount of time sharing with each person about her story nearly became a full-time job for her, she explained. It even started taking away time spent with her family, but again, family came up with an answer.

It was her sister, Hudson, who suggested doing an Instagram and Facebook blog to allow people to see her process. She struggled to post regularly in the first year, posting sometimes as infrequent as twice a week.

“I didn’t think people really cared what I ate for breakfast, lunch or dinner, or cared what my weekly weigh-in looked like,” Carter said.

On that, she was mistaken. She started getting 20 to 30 messages a day and could not keep up, so she made the decision to post daily and also make it routine like exercise became in her life.

Now, she posts approximately 90 percent of what she eats, although she joked “sometimes I’m too hungry to take a pic.”

More importantly than daily diet, though, Carter posts her weekly weigh-in totals and also certain products which work well on WW and others which do not.

The blog is not all sunshine, though. Carter admits to sharing high and low moments online.

“I share the good, the bad and the ugly, because that’s life. This is my journey, not a straight shot to a destination,” Carter said.

With the internet’s not-undeserved reputation of being a home for snark and snide comments, Carter said people have been “nothing but amazing” with their feedback.

Carter’s advice for anyone starting a plan is to do just that: plan.

Making planning a priority like brushing teeth or washing clothes is paramount to success of those plans. It does not take being super-organized or “a Pinterest mom” but just planning meals in advance.

In her case, she does not prep the meals in advance because she observed food going to waste when life throws its inevitable curve balls into anyone’s best-laid plans.

She plans the week on Sunday in terms of suppers, then visits the grocery story Monday morning to shop for the whole week.

In the case of WW, the app on her phone helps her when she knows she’ll be eating out. Even better is the idea of pre-tracking meals, which she says happens every Tuesday because the family does not miss Taco Tuesdays at Jalepenos. She can plan her lunch out and how many points it will take so she has enough points for supper.

“The WW app is so great and makes meal planning a breeze,” Carter said.

Her first goal was to lose 60 pounds, but Carter said her future goals continue to change. She initially added 30 pounds to that goal, but now she wants to reach the 100-pound mark and maintain her weight.

Along with that is the idea of earning a lifetime membership to Weight Watchers. It’s a status members earn when staying within two pounds of a person’s lifetime goal. Meetings are free along with a free subscription to WW’s online tools.

“My ultimate goal is to keep the weight off and remain a WW lifetime member for life,” Carter said.

Her message to people is straight forward: believe in yourself and take care of yourself.

“You can not pour from an empty glass. We often get so overwhelmed caring for others that we often put ourselves last, but self care is so important,” Carter said.

“You can in fact do it. You really can. You just have to want it.”