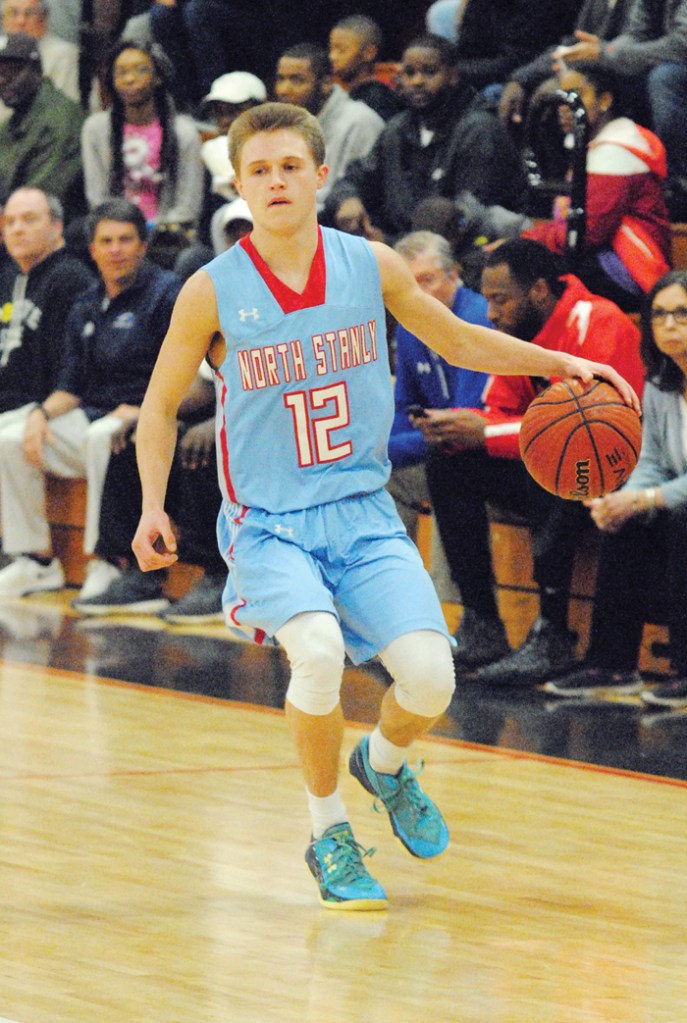 Bryson Childress enters his senior season with North Stanly having scored 1,404 career points for the Comets. (Photo by Charles Curcio)

The 2018-19 basketball season opens this month as the five high school men’s programs look to find success on the court.

The Bulldogs enter the team’s fourth season under head coach Marc Raye who went 19-8 last season and has a 48-32 record over his first three seasons at Albemarle.

Gone from the team is 1,000-point club member Noble Washington and Adafe Price, along with guard King Medley.

The Bulldogs head coach said despite losing three talented players, this year’s team will be one of the greatest he has coached.

“We may not be the most talented, but we are a team that is committed to each other for the greater cause. The young men are very special and are willing to learn from each other. They really hold each other accountable and the encouragement with one another is special,” Raye said.

He said every game “is a rivalry; that is our approach. We are undersized, but really make up for it in our speed, IQ and commitment to each other.”

Stanly Walker returns as the associate head coach, while the staff has two new volunteer coaches. Drew Cone played for Raye at East Forsyth and currently plays at Pfeiffer, while Jeremy Harris is new to coaching but not to the game, having played in high school at North Stanly.

Albemarle returns the team’s starting point guard in senior Cameron Williams, who is entering his fourth season on the varsity squad.

Also returning is Brandon Christian, who has also played on varsity since his freshman season. Both Williams and Christian will play in college next season, Raye said, adding both carry strong GPAs in the classroom (3.6 and 3.2, respectively).

Another promising player this season who came off the bench last year is Da’Sean Horne. The senior can shoot from mid-range and long distance, Raye said, adding he “can bang on you if given the opportunity” in the paint. Raye added he is “looking for big things” from Horne this season.

Malachi Baldwin is a returning junior who was a point guard last season. Raye said he “can get the job done and has a high IQ for the game.” Raye described Baldwin as a great leader adding “his game maturation has increased tremendously.”

Regarding the juniors, Raye said the players “have all shown great signs of being productive on the court. They will be a force to reckon with and the glue to make this train stay on the tracks.”

Raye said Little “has a bright future in the game” and both “his grades and his game have made complete turnarounds for the better.”

The Albemarle coach said the two freshmen give the team a bright future. Currie is a shooter and defender and his transition from middle school to high school has been “surprising because we have taught a lot in a little time and he absorbs just about all the information given to him.”

Albemarle’s other freshman, the son of the head coach, “is a small but tenacious point guard that can stroke it from deep and mid-range. His ability to get to the basket and make great decisions in a split second is remarkable.” M.J. is learning from the team’s two veteran point guards, Williams and Baldwin, Raye said, adding his son “is a true student of the game. He is my man and I love that kid; as a father, I am so proud of him.”

Childrey said he had “high hopes and expectations” for the team returning so many players this season. He added he wants the team’s seniors “to end their careers on positive notes.”

The Comets look to a new head coach this season after Chris Misenheimer stepped down. Misenheimer was 114-85 in his time at North, including taking the team from a two-win season in his first full season, 2011-12, to 24-6 last year and 15-1 in the YVC, winning the regular-season title. North advanced to the fourth round of the state playoffs and lost to eventual 1A state champions Winston-Salem Prep.

Paul Childress, who served as an assistant head coach for three seasons, takes over as the coach for North. Childress played his high school ball at Albemarle for Bulldogs head coach Dave Holcomb.

Childress said he will “implement a lot of the same things (Holcomb) taught us in regard to on-court strategy, discipline, teamwork, work ethic and responsibility.

The new North coaching staff has a great deal of experience on it with the addition of former Albemarle head coach Al Andrew. Andrew, who played for Holcomb and was an assistant to Holcomb for several years, won 402 games in his time head coaching the Bulldogs.

Brett Lowder also joins the coaching staff for the Comets this season. Lowder played for the Comets in high school and was an assistant coach for a number of seasons at West Stanly under head cocah Rudi Heath.

The team will also have a special consultant for the coaching staff in long-time Pfeiffer coach Jack Ingram. Childress said Ingram is “someone with a lot of experience and success who will help us in special areas.”

Regarding the staff, Childress said he felt “pretty good we have a good group of coaches that will contribute ideas and concepts.”

Returning for the Comets is a three-time All-Conference selection in senior guard Bryson Childress. The YVC’s Player of the Year and an all-district selection, Childress averaged 22 points, five steals, four rebounds and three assists per game last year.

Also returning is senior guard Carson Lowder (13 ppg). Lowder started the past two seasons for North and Coach Childress said he “expects and needs a big year from Carson.”

Senior forward/center Garrett Clark also returns for North and “will see a much more expanded role,” according to Childress. Clark is “a tough kid that rebounds and defends well” for the Comets, the North coach added.

Moving up for the playoffs last season was sophomore guard Cooper Hogan, who this season will also have an expanded role, according to Childress.

North graduated senior center Jason Doerr but has an even taller player coming to the squad this season. Nalik Veasley is a 6-foot, 7-inch post player whom Childress said “will have a major role” with the Comets. Described as an excellent rebounder and defender, Childress said Veasley also has the “versatility to handle the ball and make decisions” in North’s passing game.

Two freshmen are expected to play on varsity in Dyson Bell and Koby Poole. The team will also likely see additions from the football team once the season ends for the Comets.

Childress said with the school’s run in the football playoffs, the basketball team is working hard but he feels North “is a little behind in terms of preparation and development.” The Comets’ head coach added North has “good kids whom are very competitive” and “with time and the right development, we could have another good year.”

North plays some good teams this season, Childress added, so North “will really have to develop chemistry, teamwork and strategy to be as successful as we want to be this year.”

In his first season back as the Bulls’ head coach last year, Sean Whitley helped the team improve from five wins to 11-12 overall and 9-7 in the YVC.

New to the Bulls from the JV squad are Duncan McSwain, Tyler Watkins and Jadius Jones, whom Whitley said “will provide some depth at the guard position.”

“I feel that with our experience from last season, we should really compete with the top teams in the conference, ” Whitley said. “The guys were learning a new system last year, so hopefully we’ve grown as a group and are ready to raise the bar in terms of our expectations.”

Head coach John Thompson has 87 wins in nine seasons as the Colts’ head coach including last season when West was 14-14 overall and 7-3 in the Rocky River Conference. The Colts reached the first round of the state 2A playoffs and have qualified for the postseason three years in a row.

The Colts have two promising sophomores guards on the team this season in Jake Bartell and Jordan Manshack.

“Some of our guys have worked extremely hard in the offseason and that will show,” Thompson said.

The RRC has some tough teams including the reigning 2A state champions (Forest Hills) and a school which Thompson said has the biggest front line in 2A basketball in Mount Pleasant.

“I think we could be right there in the mix if we get leadership from our seniors and our underclassmen continue to improve,” Thompson said.