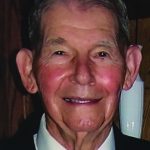 He was a member of Stanly Community Church in Richfield and a past member of New Mt. Tabor Methodist Church. He was also a past member of Richfield Baptist Church, where he was a Sunday School Teacher and Deacon, and a past member of Highland Baptist Church where he served as a Sunday School Teacher.
He was a graduate of Richfield High School, Pfeiffer Junior College, and Catawba College with a BA Degree in Education (1951). While in high school and college, he played basketball, baseball, and semi-pro baseball from which he was drafted to play for the Cincinnati Reds.
He served four years active duty in the U.S. Air Force from 1951 – 1955 during the Korean Conflict, with one year active service in Korea.
Mr. Miller retired after 40 years of employment in the insurance industry working for Traveler’s Insurance, James J. Harris & Co., and Marsh & McLennan Co. in Charlotte, NC, from which he retired on September 30, 1995, as Senior Vice President.
He was a member of the VFW and past member of various Optimist clubs, and the Richfield Civitan Club.
He is survived by his wife of 38 years Nita Miller, children Mike Miller (Connie) of Charlotte, Barbara Pane (Joe) of Richfield NC, and Chris Miller (Krista) of Indian Trail, step children Rick Clayton (Donna) and Sam Clayton (Cindy) of Richfield, NC. Grandchildren Chase Miller, Zachary Miller and Ardyn Miller. Step grandchildren Joshua Clayton, Daniel Clayton, Anna Clayton, Grace Clayton and Jacob Clayton. His sister Charlotte Campbell preceded him in death.
He enjoyed living in the country, having a vegetable garden (yearly!) and working with beef cattle with his father-in-law. He enjoyed exercising regularly and playing golf with Chris. He also enjoyed going to many sporting events with Mike, as well as attending his daughter Barbara’s dance recitals.
He will be remembered as a loving father and grandfather, and he cherished the time he got to spend with his grandchildren.
The funeral services will be held at 2:00pm on Friday, November 23 at Stanly Funeral Home with visitation from 12:30 – 1:30pm. Memorials can be made to Stanly Community Church at 40716 Millingport Rd, Richfield NC 28137, or Hospice of Stanly & the Uwharrie.