South Stanly prevails on the road at Lakewood, 14-10 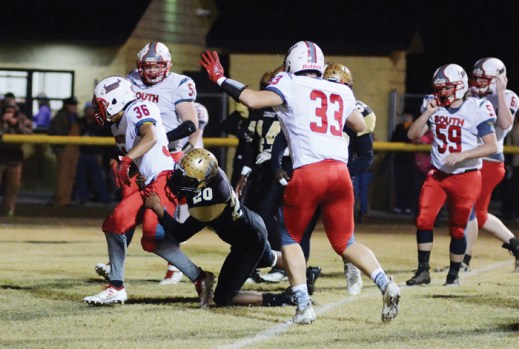 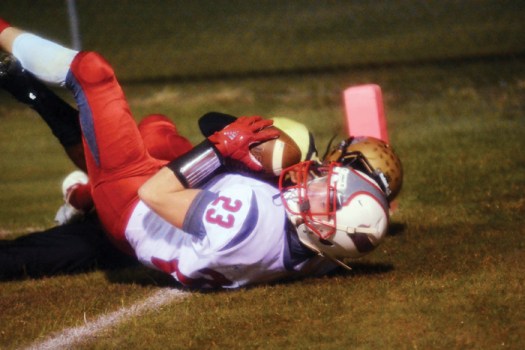 Tony Loftin cradles the ball lying on the ground after his touchdown reception in the third quarter Friday. (Photo by Starla Whitley)

The 54th lifetime playoff football game for South Stanly came on Friday night in the opening round of the 1AA playoffs. The Bulls, seeded ninth in the Eastern Region, made the long trip eastward to Lakewood to take on the eighth-seeded Leopards.

In three previous playoff matchups from 2007-2011, South was 1-2 against Lakewood and had not beaten the Leopards on the road.

This time, South got off to a fast start in the game and went on to post the school’s first playoff win since 2012 with a 14-10 win.

Junior quarterback Jaquez Cooke had a big night for the Bulls (8-4), leading the team with 118 yards on 16 carries. Through the air Cooke was 6-of-13 for 63 yards and a touchdown pass. Marcus Green added 60 rushing yards on 11 carries with a touchdown as well.

One of Cooke’s completed passes set up South’s first touchdown on the game on the opening drive. After Tori Colson took the opening kickoff down to the Lakewood 41, Cooke scrambled left and found Colson at the Leopards 3-yard line with a pass Colson caught while on his knees. Three plays later, Green powered over the goal line on third down from one yard out for a touchdown. Green then carried the ball for a successful two-point conversion, putting South up 8-0 with 10:03 left in the first quarter.

South’s defense forced a three and out on Lakewood’s first possession, then forced a turnover on the second which was recovered by the Bulls’ Camren Huneycutt.

Lakewood kept the game close early, including stopping the Bulls in the red zone on fourth down at the Leopards 13 on the first play of the second quarter. The Leopards also picked off a Cooke pass on South’s first possession of the second period.

Neither team managed points for the rest of the first half, leaving the Bulls up at halftime 8-0.

The Bulls took a gamble which paid dividends immediately on the opening kickoff of the second half. South went for an onside kick, recovered by the Bulls’ Nate Kirby. The Bulls drove 47 yards in five plays, capped by a 15-yard touchdown pass from Cooke to Tony Loftin in the back-right corner of the end zone. The two-point conversion failed, leaving South up 14-0.

Lakewood immediately answered with a 13-play, 67-yard scoring drive, capped by a one-yard TD run from Allen Melvin. The Leopards went for two points and Melvin barreled over the goal line, pulling the hosts within six points, 14-8, with 4:57 left in the third quarter.

As the game moved into the fourth quarter, both teams had the football for long drives but neither produced points. Lakewood got down to the South 12-yard line midway through the fourth, but a Lakewood pass fell incomplete on fourth down.

Pinned deep, the Bulls were forced to punt but a mishandled snap led to a safety, pulling the Leopards within four points, 14-10, with 4:50 remaining in regulation.

Lakewood took the free kick from the safety and started a drive at the South 35 in the final minutes. The Leopards were stopped on fourth and 14 from the Bulls 40 when Gaddy knocked down a Lakewood pass. South took over with 2:30 left in the game ran out the clock to preserve the win.

South head coach Ryan Ochier said winning was “unbelieveable” and “an awesome feeling.” He added “these kids have come so far and bought into everything we have told them. It really confirms every belief of the season.”

South’s win Friday was the first playoff win since beating Chatham Central in 2012.

The Bulls face a challenge this Friday when the Bulls travel to Tarboro to take on the No. 1 seeded undefeated Vikings. The defending 1AA state champions had a bye in the first round of the playoffs and are on a 26-game win streak from last season.