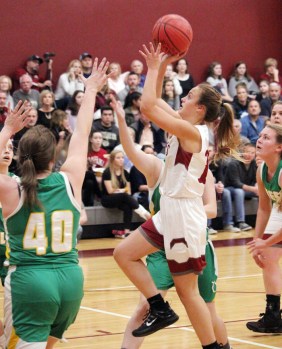 Lillie Austin drives down the lane for a layup attempt in Tuesday's home win over West Stanly. (Photo by Charles Curcio) 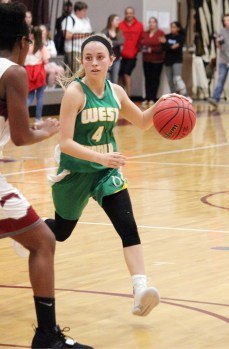 Brittany Greene had 10 points for the Colts in Tuesday's game at Gray Stone. (Photo by Charles Curcio)

Both teams had won regular-season championships last season in their respective conferences. Gray Stone won the 1A Yadkin Valley Conference title while West won a share of the 2A Rocky River Conference crown.

The Knights used a strong third-quarter shooting performance to pull ahead Tuesday and earn a 22-point home win over the Colts, 67-45.

Seccora Medley led three in double figures for Gray Stone with 18 points, many coming in the paint on put-backs. Danielle Werts knocked down three triples in the second and added 15 points for the Knights while Lillie Austin scored eight of her 10 points in the first half.

Gray Stone finished the game shooting 26-of-65 overall (40 percent) including 5-of-16 from the three-point arc. The Knights’ best quarter of the evening came in the third when the hosts hit 9-of-18 from the field and 3-of-7 on 3-pointers. Gray Stone was also 10-of-14 for the game at the foul line.

West led 3-2 early on a Greene 3-pointer and tied the game 6-6 on an old-fashioned 3-point play from Furr midway through the first quarter. Back-to-back baskets by Austin late in the first quarter put the Knights up for good.

Olivia Payne knocked down a late triple in the first half, followed by two Werts foul shots pushed the lead back to double digits, 27-17, with 1:02 on the clock.

Leading by eight at halftime, the Knights burst out of the gates of the second half with another run. Gray Stone outscored West 7-0 over the first 1:23 of the third and stretched the lead to 20 points midway through the period. The Knights led by as much as 26 points in the frame before some late Colts free throws narrowed the gap to 22 points after three quarters.

In the fourth quarter, West got within 17 points with a 7-2 push over the first 1:40 of the final period. Werts stopped the trend with a triple and the Knights led by 20 points or more the rest of the way.

“As far as the length we have, we have three girls with tremendous length. When we can put them on the floor, it changes the game,” Gray Stone head coach Robert Stack said. He added those girls are also quick and “it’s not just size…they are athletic and get on the boards.”

Stack said Werts’ touch from the outside was something he has been waiting to see from her “to get into the flow of a game. She can hit the outside shot and create; we need her to do both of those things…when she started clicking, we got into a groove.”

The Knights are off until Tuesday when the team travels to Cox Mill for a non-conference game against the Chargers.