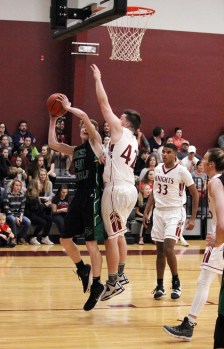 West Stanly's Austin Medlin drives the lane defended by Gray Stone's Brennan Bailey in the second half of the Colts' road win Tuesday over the Knights. (Photo by Charles Curcio) 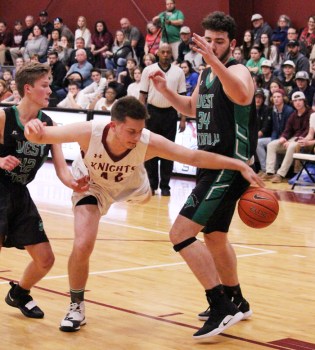 The West Stanly men’s basketball team opened the season with a road game Tuesday night at Gray Stone with just eight players dressed out for the game at the Knights.

Opening night for the Knights came a week prior as Gray Stone began the season the previous Tuesday with a 72-64 road loss at Langtree Charter Academy.

West fought foul trouble and broke the game open in the second half to open with a 16-point win over the Knights, 65-49.

Austin Medlin knocked down four 3-pointers and led West (1-0) with 25 points. Hayden Greene added 16 points in the pain while Trevor Kelly scored all 11 of his points in a fourth-quarter run.

Alex McDow paced the Knights (0-2) with 17 points while Dylan Tuzenew added nine of his 11 points for Gray Stone in the second quarter.

The Knights led 4-0 early before an 8-0 West run forced a Gray Stone timeout. The visitors led by five points before a late Chase Viscomi bucket cut the deficit for the Knights down to three points, 11-8. With West’s bench already shortened, Kelly picked up three fouls in the first quarter.

In the second quarter, West led by four points at two spots midway through the period, but the Knights pulled into a tie, 21-21, with three minutes left in the period on a McDow triple. West stretched the lead back to four, but a Tuzenew three with 1:40 on the clock kept the Knights within a point.

The Colts closed out the first half with a 7-0 run including four points from Greene and an Ethan Conner three-point play to lead 32-24 at halftime.

Gray Stone scored the first six points of the second half and got within two points, 32-30, on a Brennan Bailey free throw. The two teams traded baskets for the next several minutes before West stretched its lead, outscoring the Knights 9-4 over the final 3:22 of the period. The Colts took a 48-41 lead to the final period.

Kelly found the touch from the outside in the fourth quarter and avoided further foul trouble. Leading by five, Kelly added two 3-pointers along with a bucket from Medlin to push West’s lead to double digits, 56-45, with 4:35 left in the game. West led by as much as 18 points in the final seconds of the game en route to the win.

West head coach John Thompson talked about moving the ball better offensively as the team’s focus in the second half after the Colts’ offense “was stagnant” in the first half.

“(Gray Stone’s) defense was pretty good, but we weren’t moving the ball. Once we started, it’s amazing how that basket gets a little bigger when you’re not forcing things,” Thompson said.

Kelly’s offense was big in the win, the West coach said, adding Kelly did a good job of avoiding further foul trouble in the second half. He said Kelly did some of the little things well in the game that do not show up in the box score, like tipping an offensive rebound out to a teammate.