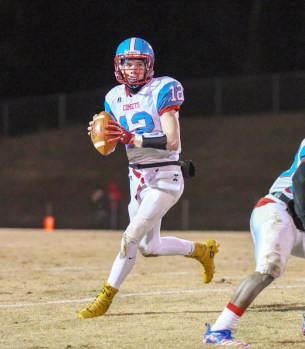 North Stanly quarterback Bailey Baker threw for three touchdown passes in the Comets' 42-0 win Friday night at Granville Central in the second round of the 1AA state playoffs. (Photo by Dawn Lucas) 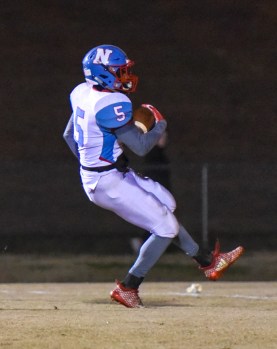 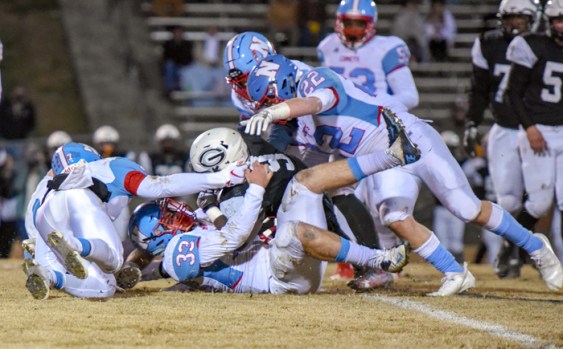 The North Stanly Comets went on the road Friday night in the second round of the Eastern Region of the 2018 1AA state playoffs as the No. 5 seed playing at No. 4 Granville Central.

North (11-2) kept its shutout streak alive and advanced to the third round of the playoffs for the first time in school history with a 42-0 win over the Panthers (8-2).

L.J. Rush caught two touchdown passes for the Comets and delivered on defense with an interception early in the first quarter on the goal line. He finished with 38 receiving yards.

Garrett Clark also hauled in a 40-yard touchdown pass for the Comets and recovered a fumble in the end zone defensively for a touchdown.

North quarterback Bailey Baker added to his county-leading numbers for passing Friday, going 8-for-11 for 119 yards and three touchdowns to one interception. Baker has thrown for 1,114 yards and has 19 touchdowns.

On the ground, Cameron Davis rushed seven times for 102 yards including a 65-yard touchdown run. Davis now has 92 career rushing touchdowns and 96 total for his high school career. With Friday’s efforts, Davis went over the 6,000-yard career mark with 6,098 career rushing yards.

D.J. Rhone added 91 yards on 12 carries for North with a touchdown as well; Rhone has rushed for 1,292 yards and 16 touchdowns this season.

Comets head coach Scott Crisco is now the winningest football coach in school history in terms of overall wins (36) and win percentage (73.5). North’s 11 wins this season is the most ever for a Comets team and the most for any county team since Albemarle won 11 games in 2013.

Crisco said he was pleased with the win but “(North’s) offense sputtered at times. Offensively, we need to be more consistent.”

North’s coach praised his defense and kickoff teams for “coming up big” in the win. With Friday’s shutout, the Comets have not allowed a touchdown since the opening quarter of the North Rowan game, a span of 19 quarters of football.

“Our boys were focused and came ready to play. We will fix some small stuff this week and be ready to play Tarboro,” Crisco added.

The Comets, ranked second in the state by MaxPreps in the 1A, take on the top-ranked 1A team this week in the undefeated Vikings (12-0). Tarboro will bring a 27-game win streak into Friday’s game as the defending 1AA state champions.