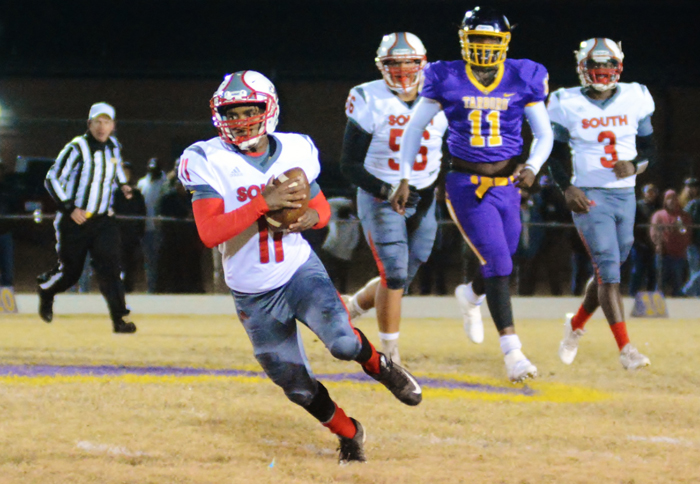 The South Stanly football team entered Friday’s road playoff game in Tarboro as the No. 8 seed in the 1AA East Region and ranked 20th overall in the state in the 1A according to MaxPreps.com.

Friday’s opponent, the Vikings, were ranked No. 1 in both and ended the Bulls’ season by the score of 64-6.

Tarboro (12-0) amassed 310 yards on the ground on 27 carries, led by senior Keon Caudle with 84 yards on six carries. The Vikings also had seven rushing touchdowns in the game.

South Stanly (8-5) quarterback Jaquez Cooke threw for 77 yards on 7-of-16 passing with one interception. Cooke also ran for 40 yards on 12 carries with a touchdown.

On the ground, Rodney Hammond led South with 44 yards on 13 carries.

Despite allowing the most points this season to an opponent, South’s defense forced four fumbles in the game and recovered three of them. Justin Gaddy led the defense with three solo tackles and four assists, including two tackles for a loss. Elijah Caple, Camern Huneycutt and Cade Whitley all recovered fumbles for the Bulls as well.

After South was stopped on the opening drive of the game, the Vikings’  Clifton Joyner Jr. scored on the second play from scrimmage for the hosts from 27 yards out to put Tarboro up 7-0 early.

The Bulls drove down to the Tarboro 46 but were forced to punt. A fake punt was unsuccessful, giving the ball back to the Vikings.

South’s defense produced a takeaway on Tarboro’s second drive of the game when the Bulls recovered a fumble on a running play.

The Vikings bounced back, returning a Bulls fumble 15 yards for a touchdown. The extra point attempt failed, leaving the hosts up 13-0.

Ty’Rez Higgs picked off a Cooke pass on South’s next possession at the Bulls’ 37-yard line. The Vikings drove to the South 5, but the Bulls stopped the Vikings on fourth down and three to take over on downs.

South then was whistled for a holding penalty with the ball in the end zone, meaning a safety and two points went to Tarboro.

The Bulls turned over Tarboro again, recovering a fumble but South lost the ball on a fumble back to the Vikings at the South 39.

Tarboro scored on the first play of the second quarter when Caudle rushed to the right side for a 13-yard touchdown. The Vikings went for two through the air and converted, making the score 23-0.

A long punt return to the South 12 set up another touchdown for Tarboro. The Vikings scored three more times in the second quarter, including one set up by a 45-yard pass from Kimani McDaniels to Zion Brooks, and led at halftime 50-0.

With a running clock in the second half, the Vikings scored two more touchdowns before the Bulls spoiled the shutout bid in the final three minutes of the game. Jaquez Cooke connected with Lawson Hicks for a pass down to the Tarboro 5. Cooke scored around the right side on a bootleg on the next play.

“We moved the ball well on them. Our offense was heavily depleted with injuries and had several starters on the sideline,” South head coach Ryan Ochier said. “Tarboro has too many weapons. They are legit. (Tarboro head coach) Coach Craddock has done a great job of developing the program over time and does a tremendous job of keeping them together.”

Regarding the season, Ochier said “all good things come to an end. The season was a success on many levels. I’m very proud of this year’s team and how we were able to come together as one unit.”

South graduates 22 seniors; the Bulls finished third in the Yadkin Valley Conference and posted the program’s first record above .500 and the most wins in a season since 2012.