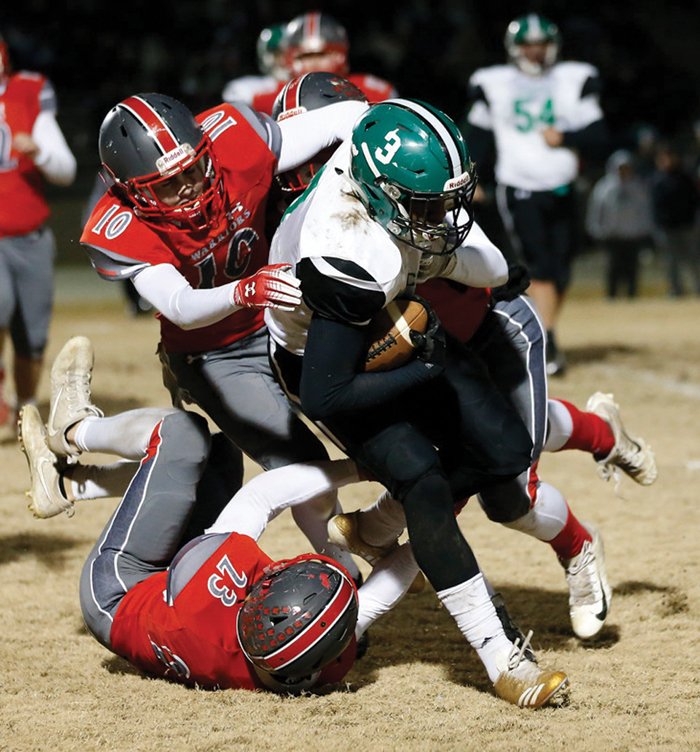 Jordan Poole is tackled by Wheatmore’s Zach Berrier (No. 10) and Camden Wishon. (Photo by Earl Bradshaw)

Temperatures for the West Stanly football team in its second-round playoff game in Randolph County dipped to the mid-30s by kickoff time.
The No. 5 seed in the 2A state playoffs, West made the trip to Wheatmore High School to face the No. 4 seeded Warriors.
Wheatmore, who entered the game with more than 2,000 passing yards on the season, had seven rushing touchdowns in a 48-13 win over the Colts (7-5).
After West went three-and-out on its first possession, the Warriors (12-1) went 49 yards in four plays, with Trexler scoring the first of three rushing touchdowns in the first quarter.
Turnovers hurt the Colts early in the game. On West’s next possession, Nick Parker was picked off by Claude Nydayishimiyre who returned it to the Colts’ 1-yard line. Trexler took the ball over the goal line on the Warriors’ next play, extending the lead to 14-0.
West fumbled on its next possession and Wheatmore drove down to the Colts’ 1-yard line. This time, however, a Nick Halo pass at the line was picked off by Jordan Poole.
The Colts pushed the ball out to the West 40 and turned it over on downs. Two plays later, Trexler scored his third touchdown of the period with just over three minutes left in the opening quarter.
Wheatmore’s longest drive of the first half finished early in the second period, an eight-play, 58-yard drive. Trexler scored from 14 yards out, putting the hosts up 28-0.
West ended the Warriors’ shutout bid on its next drive by going 77 yards in five plays. Poole busted through the left side of the line and raced 46 yards downfield for a touchdown. Aldo Cruz’s extra point made the score 28-7.
The Warriors answered with a 38-second, 65-yard drive; Harrison Moffit scored the first of his three touchdown runs to put the hosts up 35-7.
Both teams had two possessions in the final eight minutes of the first half but neither scored. Halo’s pass to the end zone on fourth down at the Colts 20 was ruled incomplete on the Warriors’ second possession. West then ran the clock out to end the first half trailing by 28 points, 35-7.
The hosts took the second-half kickoff and ran six minutes off the clock but did not score. The two teams exchanged possessions, then another West fumble set Wheatmore up at the Colts’ 33-yard line.
Six plays and two minutes later, Moffit scored from 12 yards out, but the extra point was no good, leaving Wheatmore up 41-7.
West turned over the ball on downs deep in Colt territory midway through the fourth quarter and the Warriors came within one point of a running clock with Moffit’s third touchdown of the game, 48-7.
The Colts responded with a six-play, 37-yard scoring drive set up by a long kickoff return by Christian Layton. Lukas Scott scored from three yards out, but the extra point went wide, leaving the Colts down 48-13.
Backup quarterback Jordan Manshack ended the game with a 14-yard touchdown pass to Daniel Hansen.
Scott finished the game for West with 178 net yards on 23 carries; as a team, the Colts had 217 yards on 42 carries.
Wheatmore ran for 285 net yards on 39 carries; Trexler, who has only been back for four weeks since getting hurt the first week, finished with 197 yards.
“(Wheatmore) is a lot more balanced than people realize,” West head coach Brett Morton said. “They are very physical. All week we said the team who was the most physical that made the fewest mistakes will probably win the game.”
Morton said regarding the season that his seniors played hard, adding “there are always positives when you get to the second round of the playoffs. It’s the opportunity to continue to get better. You’ve got something to build on.”
The Colts finished the season as the Rocky River Conference runners-up, posting the school’s first playoff win since 2006.