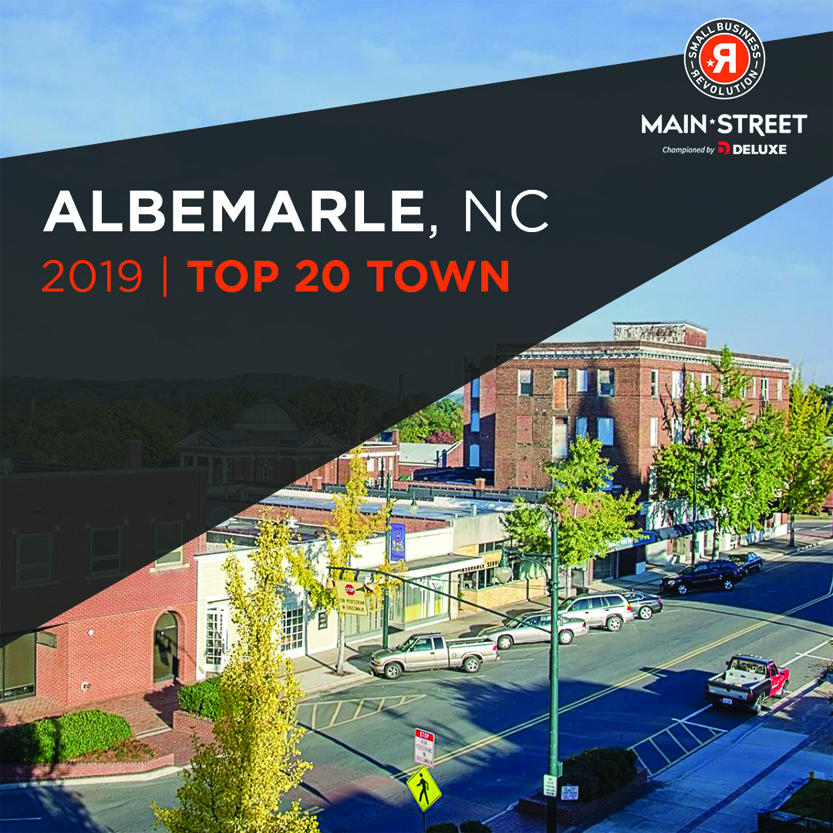 Albemarle is in the Top 20 on “Small Business Revolution,” a web-based series.

Albemarle may soon be in front of a national audience again.

Deluxe Corporation, a provider of small business marketing and financial services, has named the city as one of 20 communities in contention for a spot on Season 4 of “Small Business Revolution — Main Street.” Communities have a chance to win a $500,000 revitalization and be featured in an eight-part web series airing in October 2019 on smallbusinessrevolution.org, Hulu and YouTube.

Organizers accepted city nominations Oct. 4-26 and during November narrowed the nearly 12,000 responses down to 20.

Albemarle’s nomination came from Heather Britt, an administrative assistant and voice, violin and piano instructor at Music on Main in downtown.

Britt saw an ad for the show in a business magazine.

“I thought that would be something good for Albemarle,” Britt said. “I just kind of filled it out and didn’t really think more about it until they asked for more information about the city.”

“Downtown businesses are close to my heart,” she said. “Anything we can do to reinvigorate the downtown will benefit the city as a whole.”

“The downtown being healthy is a good sign for everybody,” Britt added. “There’s certain things that downtown stores have that chain stores can’t offer.”

Mayor Ronnie Michael said the city is pleased to be part of the final 20 cities.

“We are hopeful that the potential for Albemarle will be noticed and we will be the ultimate city chosen for this tremendous opportunity,” Michael said. “The city along with other organizations and individuals have been working to make a change to our city. The addition of Pfeiffer and new business planned for downtown will bring exciting growth to the area. This is the revitalization many have been working for and we see the area transforming into an area for medical students, classrooms, restaurants and medical facilities.”

Now that Albemarle is in the top 20 round, it awaits the next phase: the top 10.
In this part, producers from the show will travel to the communities to gather more data.

“If we make it through that round, they will pay us a visit in January and if we make the top 5 we will find out the second week of February.”

Nationwide public voting then begins, Almond said, with the winner announced in March.

Almond has already created social media posts about the selection and her plans, using #myalbemarle to create buzz on Facebook and Twitter.

“Last year, we added the Top 20 round to gather even more information about communities nominated,” host Amanda Brinkman said. “It is inspiring to watch how people in these towns love their communities and advocate for a chance to be in our final five. Watching communities come together to support their small businesses is what makes the Small Business Revolution so incredible.”

For more about the show, visit https://www.deluxe.com/sbrc/small-business-revolution.