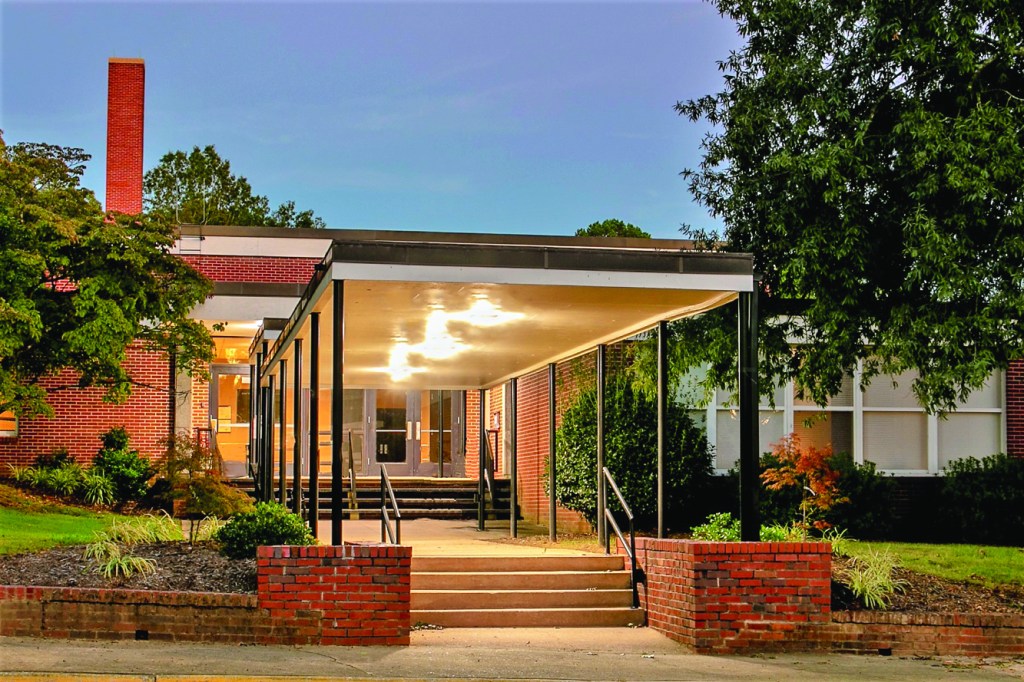 Central School Auditorium is on this year’s Tour of Homes.

Tickets and brochures will be available on the day of the tour at Glory Beans Coffee, which will open at 1 p.m. The proceeds from the event fund many of the downtown beautification projects.

Six private homes and two public sites will be open for tour.

Site 3 is the home of Mark Easler and is at 615 Coble Ave., Albemarle.

Built in 1956, this Mid-Century Modern home was once owned by Jolee Morris Fuller and was a gift from her father. Fuller was known locally for her spirited seasonal decorations of the home and for the red 1964 convertible Corvette she drove.

Fuller loved and cared for the home for many years when her health allowed it, but it gradually fell into disrepair. The present owner purchased the home as Fuller left it. Easler completely renovated, updated and restored the home to reflect its original modernist appeal. Accent walls were added and new period style paint colors were updated.

The home features three bedrooms, two baths, including the master bath in the original Eisenhower pink, and a two-car garage. As one tours this home, one will see the defining features of the Mid-Century Modern home; features such as asymmetric lines, simple shed style roofs with cantilever eaves, minimal ornamentation, use of natural and exotic woods as well as local materials such as quarried stone or slate.

The Mark Easler home is at 615 Coble Ave. it is considered Mid-Century Modern.

With the completion of the restoration and renovation, the home is now part of the North Carolina Modernist Houses, a nonprofit 501c3 educational archive specifically for modernist style homes promotion and preservation.

Reflective of the era and of MCM homes, this home showcases the “Space Race” (the race between the USSR and the United States) by creating the home of tomorrow offering the best technologies of the time. Door trims were given descriptions like “Sputnik.” For an example of this feature, take note of the door echelon style and door-bell housing.

The kitchens of MCM homes were “modern” and displayed advances in appliances and less reliance on closed spaces or unusable space. This home originally had a refrigerator that hung like a picture on the wall. The appliance group original to the house was called a GE Continental Convenience Package. The stove, oven and refrigerator were developed for the savvy and modern mom. Unfortunately, the appliances were unable to be restored or reused.

Prairie-style architecture popularized by famed architect Frank Lloyd Wright is found in many MCM homes such as this one. These were homes built of “honest” materials like natural stone, woods, glass, and concrete to blend into the natural environment landscapes.

Touring this home, one is welcomed onto the property through the orchid rock terrace walkways and will notice the natural redwood siding. Entering the home, one will appreciate the art-gallery front windows as well as the oversized tangerine-colored front door with center door knob opening. Once inside the home, one will notice a few other features typical of MCM homes: a stack stone fireplace, river bed flooring, the large, open living area with skylights and the open lighted roof deck.

Taking the restoration process to another level of authenticity, Easler restored and re-used many pieces of the original furnishings of the home.

The fourth site on the tour, and the second public site, is the Historic Central School Auditorium at 216 E. North St., Albemarle. The original Central School (previously Albemarle Graded School) was built in 1900 and was at North Third Street and East North Street. This location was victim of a fire in November 1920 but was renovated and expanded.

In 1925, a new high school was built adjacent to the original Central School and as a result, the older building became Central Elementary School.

Additions to the elementary school were made in 1952 and 1965 and included a new entrance that faced Third Street. Once the middle school that had been housed in the high school building moved to its new home, the high school was renovated and became the new Central Elementary School.

As a result, the old Central School building stood empty from 2007 until 2013 when it was sold to the city of Albemarle.

In 2014, the city of Albemarle partnered with The Landmark Group to renovate the Historic Central School. The renovation created 53 apartment units for seniors, aged 55 and above.

The renovations were completed in August 2016. The Historic Central School Auditorium was also renovated and completed in January 2018. The auditorium hosted its first performance in September. This auditorium is leased by the city and is available for rental to individuals through the Albemarle Parks and Recreation Department. The auditorium seats 247 people and boasts the original seats and stage from 1965.

The renovation of the Historic Central School buildings was part of a downtown revitalization project and partly funded by tax credits for historic preservation of school buildings.

The Albemarle Graded School/Central Elementary buildings were named to the National Register of Historic Places in 2015.

When touring this historic auditorium one will notice the most up-to-date technology, including the light, sound and presentation equipment.

Take a seat and enjoy glimpses of Albemarle’s past rolling on a continuous loop on the big screen. These vintage holiday photos were gathered from the Stanly County History Center and Museum and also from the Wallace Ivey Collection.

The Holiday Tour committee would like to extend special thanks to Owen Squires for preparing the continual loop of vintage photos and to John T. Williams Jr. for his contribution of vintage photos.

Visit https://www.thesnaponline.com/2018/11/23/addc-reveals-first-two-sites-of-tour-of-homes/ for information on the first two sites of the Tour of Homes.