Mr. Beal, who passed away on Thursday, November 22, 2018, was born on December 15, 1930.
Raised in Albemarle, NC he was the son of Benjamin Sidney Beal and Vera Pickler Beal Eaves.
After graduating from Albemarle High School, he attended Wake Forest University. He served in the United States Air Force and returned home where he graduated from Davidson College. There he was a member of Alpha Tau Omega and the drum major for the band. 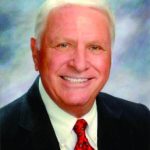 Mr. Beal was a salesman who traveled quite a bit. He finally settled in Chattanooga, TN, where he met and married Donna Kay Kinne on July 17, 1977. They moved back to Athens. GA in 1993 to her childhood home, the Daniell House, which they helped restore and place on the National Register for Historic Places.
There, he continued his food bank, which he operated for twenty-five years. He loved playing tennis, working in the yard and just puttering around the house.
He was involved in politics with the Republican Party and in his later years and ran for County Commissioner in 2004. He also enjoyed putting together the reunions for the Class of 1948 at Albemarle High School.
Mr. Beal was preceded in death by his wife, Kay Kinne Beal; and both of his parents.
He is survived by his children, Constance Anne Bundy (Macky) of Charlotte, NC, Robert Alan Beal (Jenny) of Raleigh, NC and Amy Beal Crofoot (Rob) of Cornelius, NC; stepson, Tan Beal of Ruskin, FL; grandchildren, Jessica Jennings (Jay) of Los Angeles, CA; Kathryn Lofland of Tega Cay, SC; Anna Foshee (Zane) of Tega Cay, SC; Benjamin Beal (Alyssa) of Raleigh, NC and Brittany Beal of Raleigh, NC; Alexandra, Elizabeth and Jack Crofoot of Cornelius, NC; and great-granddaughter, Jocelyn Grace Foshee of Tega Cay, SC.
Services will be Friday, November 30 at 2 p.m. in the chapel of Bernstein Funeral Home. Entombment will follow at Evergreen Memorial Park.
The family will receive friends from 12 p.m. until time of service on Friday.
The family wants to express sincere thanks and appreciation to Mrs. Lee Elder for all the special care, love and attention she gave to our father and a thank you to the caregivers from Hospice.
In lieu of flowers, donations may be made to the William Daniell House through the Historic Properties Fund, Oconee County Tourism, P.O. Box 145, Watkinsville, GA 30677.
Bernstein Funeral Home is in charge of arrangements.
www.BernsteinFuneralHome.com