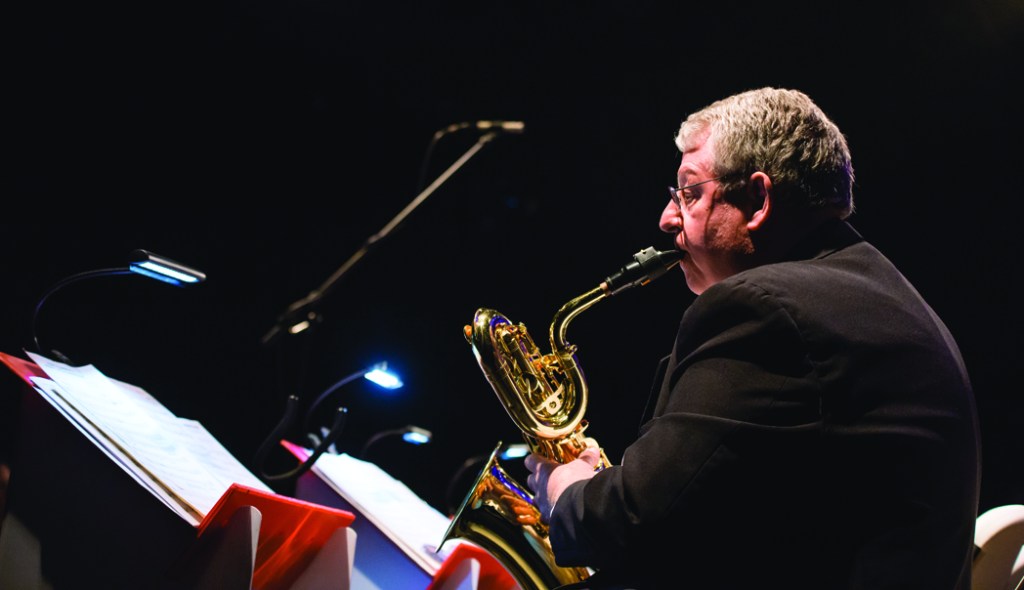 The Rowan Big Band All-Stars preform swing era favorites from the 1930’s through the present day at Lee Street Theatre in Salisbury, North Carolina on December 15, 2017. Shown is Tim Hedrick of Albemarle. (Photo by Dan Busey)

The Rowan Big Band All-Stars return to Albemarle at 7:30 p.m. Dec. 8 to perform a show through the Stanly County Concert Association.

The band features many retired and current band teachers, as well as a dentist, lawyers, accountants and other professionals who enjoy practicing and performing big band music.

Ron Turbyfill organized the group by gathering “a bunch of friends together.”

Turbyfill, who plays saxophone, calls it a “well rounded group of folks who just love to make big band music.”

“The Christmas show is one of the real high points of our year,” he said. “We do a full program of Christmas hits in swing time.”

It is the Christmas show which brings the Rowan County Big Band All-Stars to Stanly County.

“Our Christmas show is one of my favorites and will be a great program,” added Hedrick, who will be on baritone sax for this show. “With the addition of the Moonglows, a six-member vocal group, and Nikki, Bill and Alexis (vocalists) you will hear some great old favorites.” 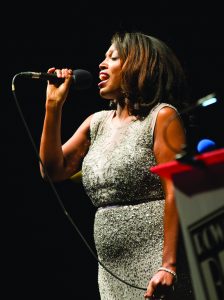 “Oh, I love it,” the Concord dentist said. “Band was always my favorite. He was one of my favorite teachers.”

Bailey has been singing with the band for about five years. She discovered it after reconnecting with Turbyfill upon seeing an ad for a show. Later that year she was performing in the band’s Christmas show.

“It’s very satisfying seeing students I taught many years ago being successful in the community,” Turbyfill said. 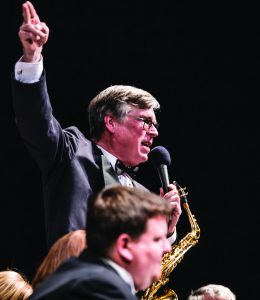 The Rowan Big Band All-Stars preform swing era favorites from the 1930’s through the present day at Lee Street Theatre in Salisbury, North Carolina on December 15, 2017. Shown is Ron Turbyfill, founder of the group. (Photo by Dan Busey)

Turbyfill said the band is not out to make money, but it does use whatever funds it acquires from shows to help others. Each year the band donates to Communities In Schools in Rowan County for a scholarship of $500, sometimes two scholarships. Funds are awarded to a Rowan student who has been served in the program.

The group performs around eight times per year. Another annual performance is a Fourth of July program in Faith.

“We practice on Sunday evenings at a church fellowship hall that can host us,” Turbyfill said.

He said having fun takes priority.

“It’s truly a group of people that enjoy each other’s company,” he said. “We have been together a long time. We don’t have a lot of coming and going in the band.
I really appreciate the time all the people put into it.

A portion of the band’s proceeds from the show will be donated to Stanly County high school band programs, Turbyfill said.

“We get requests all the time for big band music so we decided to bring the best for the season,” said Charlotte Maness, president of Stanly County Concert Association. “This 18-piece ensemble is made up of professional musicians from our area who enjoy playing for concerts and events in the region and they enjoy helping fund the arts in our schools. What a great night this will be, Christmas standards set to swing time, soloists and a special addition, The Moonglows, a six-member vocal group specializing in jazz harmonies and acapella works. This will truly help us bring in the holiday season with music we all love.”

Maness said Stanly Community College, Pfeiffer University and high school band students are invited guests as part of SCCA’s educational outreach. Parents of band students can attend for $10. Group rates are also available for 15 or more at a price of $15 each. Visit stanlyconcert.com for more details or call the Stanly County Agri-Civic Center at 704-986-3666.