2 Forest Hills spots are on ADDC’s Tour of Homes

The proceeds from this annual event help fund  projects that enhance the appearance of Downtown Albemarle. This year’s tour will showcase six private homes and two public spaces.

Site No. 5 is one of two Forest Hills homes overlooking the  small neighborhood park known as Azalea Park. 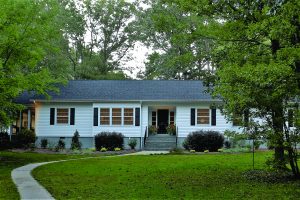 Contributed
The house at 617 Azalea Dr., Albemarle, is home to Teresa Wagoner Henry and her son, Seth Dickinson.

At 617 Azalea Dr. is home to Teresa Wagoner Henry and her son, Seth Dickinson.
Henry, a former Albemarle resident, returned home and purchased the house in 2017. The house is a traditional ranch style built in 1950 by Doris C. Dunlop Gehring and her husband, Edward L. Gehring.

The home has seen a number of updates and decorating styles since the time of Mrs. Gehring’s original monochromatic Robin’s Egg Blue interior painting throughout the house.

Previous owners Garry and Rebekah Stepp completed notable renovations during their ownership and created an open floor plan by removing a wall and adding columns between the living room and den. The kitchen space was also opened to allow for better flow and accommodate their active  lifestyle.

Since the fall of 2017 the current owner has completed a master bath renovation, added a skylight in the den, installed Quaker doors on the porch, updated the landscaping and added a rear yard fence.

Two of the owner’s favorite features of the house are the wide hallway with spacious built-in storage closets and the large glass sun porch with slate flooring.

“The sun porch is our favorite spot for watching bluebirds and hummingbirds. It’s like being outside all the time,” said Henry.

Ticket holders just have to step next door to appreciate the beauty of another mid century modern home at site No. 6, where residents Debbie Rutledge-Holt and Sam Holt have spent the past five years restoring this Frank Lloyd Wright inspired design. 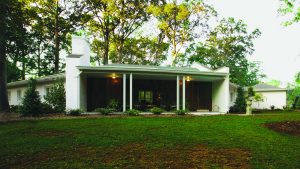 Contributed
Next door to Henry and Dickinson is site No. 6, the home of Debbie Rutledge-Holt and Sam Holt.

Built in 1951 by William Martin Harris for the Groves family, this structure has been home to several owners since, including Gerald and Sue Morgan and Keith and Christine Andrews.

The house was remodeled in the early 2000s and walls separating the dining room, den and kitchen were removed to create one large room.

In 2017 the house was restored by Todd Jamieson Hopkins to its original design, incorporating Italian travertine stone in the kitchen, den and dining room.
Custom, wormy-maple cabinets were built by the James Lowder cabinet company to add storage space to the kitchen.

The exterior of the home features several architectural features, including a three-sided front and back side with extensive use of glass with panoramic views of the front and backyards.

A circular wall encloses the backyard and a semi-circular patio was added in 2014. The front porch, living room and library are paneled with natural redwood from Washington, welcoming the exterior texture inside the home as is unique to the Wright style.

The Holts have added their style to the interior through their interest in art and antiques.

The home decor consists of an eclectic mixture of period antiques and contemporary furniture along with a collection of original oil paintings.

The dining room chandelier is designed with antique German crystals.

“The house chose us and not the reverse,” Debbie said. “Such an eclectic, mid-century design such as this house is often misunderstood and under appreciated.

“Restoring it to its original design allowed the house to breathe again and to become what it always was meant to be. The house and the yard are meant to be in harmony with each other and that is our ongoing endeavor. The house has its own presence and being. We are fortunate that the house has allowed us to be a part of its journey.”

Visit https://www.thesnaponline.com/2018/11/29/mcm-home-central-auditorium-on-holiday-tour-of-homes/ to learn about other stops on the tour.