Adelaide Moose Pickler, 92, of Raleigh, formerly of New London, died peacefully on November 28, 2018, surrounded by family.
Adelaide was born on August 29, 1926, the only daughter of Guy Howard Moose and Leo Barringer Moose. 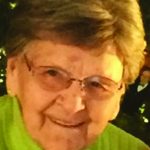 Adelaide grew up on a dairy farm south of Albemarle. She met her future husband, Maurice Pickler, when they were on a double date.
They married on June 20, 1948 and she moved to New London where her husband and his family owned Springdale Farms, a poultry farm.
She and Maurice were married almost 64 years and had three daughters. During their growing up years she loved to sew her daughter’s clothes, often making them matching dresses in coordinating colors.
Adelaide was a member of Kendalls Baptist Church for over 60 years. She was active in her church choir. She loved playing bridge and canasta with her friends.
She and Maurice traveled extensively including a trip to Russia in 1970.
Once her daughters were older she went to work for First National Bank in Richfield. Later she worked many years for the United Way in Albemarle.
In early 2012 she and Maurice sold their home and moved to Merrywood, a senior community in Charlotte. Shortly after moving to Charlotte Maurice passed away.
In 2017 after her oldest daughter had moved to Raleigh Adelaide moved to Brookdale North Raleigh. She often joked that she never thought she would live anywhere but Stanly County.
She loved being around other people and never met a stranger. She was active doing crafts, painting, knitting, making jewelry, playing bingo and getting on the bus to go “anywhere and everywhere,” living independently until just a few weeks before her death.
Adelaide is survived by two daughters, Janet Gaskins and husband Greg, of Raleigh, and Lynn Ballard and husband Wade, of Lexington, Kentucky; two grandsons, Jake Casteen and wife Aurora, of Charlotte, and Steven Ballard, also of Lexington, Kentucky; her namesake and great- granddaughter, Adelaide Casteen; four stepgrandchildren and three step great-grandchildren.
She was predeceased in death by her husband in 2012, by her daughter Brenda Casteen in 2017 and by her brothers Ned, Verne, Gene, Larry, and Kenneth.
A memorial service will be held on Sunday, December 2, at 2 PM at Kendalls Baptist Church in New London. The family will receive friends following the service in the church.
In lieu of flowers, memorial contributions may be made to Transitions LifeCare, 250 Hospice Circle, Raleigh, NC 27607 (www.transitionslifecare.org), or to Kendalls Baptist Church, 32157 Kendalls Church Road, New London, NC 28127.