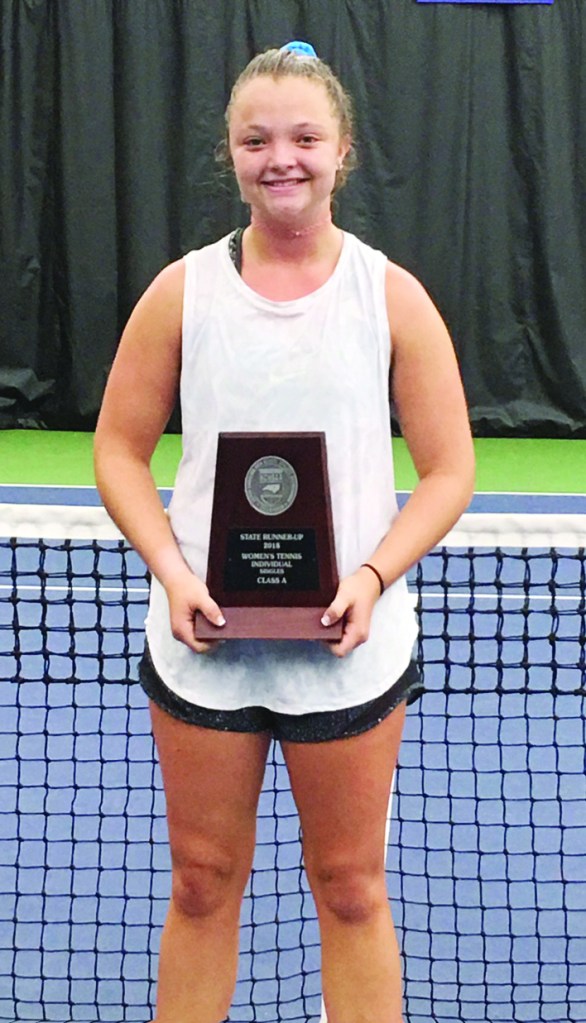 Gray Stone tennis standout Emma Bost finished as the state's runner-up in the 1A in singles tournament.

As a freshman, Gray Stone women’s tennis player Emma Bost found herself making it all the way to the final matchup in the 2017 1A state singles tournament. She finished as the state’s runner-up.

Bost repeated the feat this season playing at the Cary Tennis Center recently in the 2018 1A singles tourney. She again advanced to the championship finals, finishing second overall in the state.

The Knights sophomore started in the first round with a 6-3, 6-1 win over Georgia Lee from LeJeune, advancing to the semifinals to take on Polk County’s Hannah Jenne. Bost won in straight sets over Jenne, 6-3 and 6-1.

In the finals, Bost lost to Research Triangle’s Sabrina Grewal in straight sets, 6-2 and 6-1.

Bost said “experience is everything in high school tennis,” talking about finishing runner-up for the second straight season.

Bost has played competitive tennis for about eight years, having started when she was 8. She said she practices about two to three hours of tennis most days after school.

“It’s a hard sport,” Bost said. “I play year round, in USTA tourneys outside of school.”

She said she prefers the sport because of its individual nature yet it exists within a team framework.

“Especially in high school, you’re out there by yourself, but you’re also on a team. You learn life lessons with tennis,” Bost said.

She said she balances her school work at Gray Stone with tennis practice with good time management and focus.

Having finished runner-up twice is motivation to work harder and come back to challenge for a state title again next season, she said.

She said she hopes hard work “will take me to the finish line.”