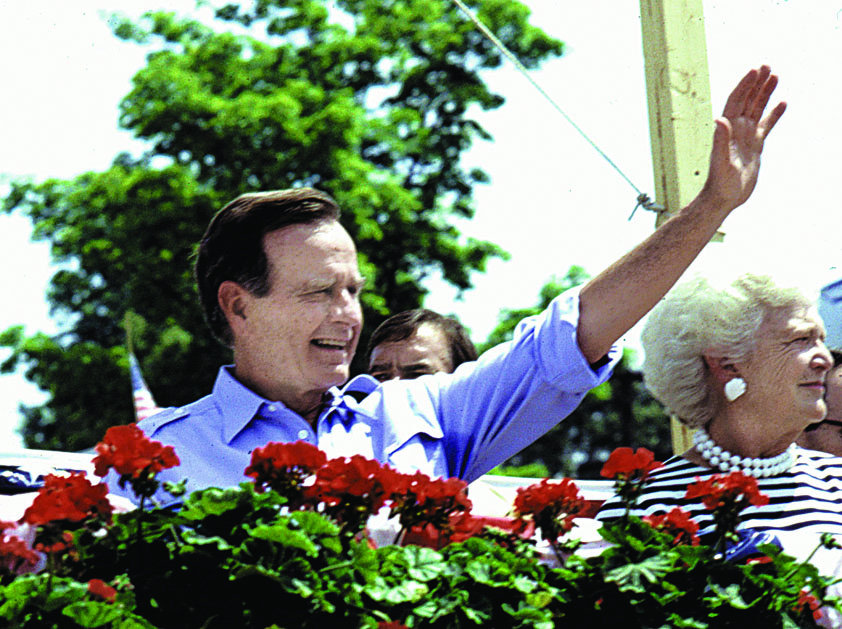 President George Bush on the platform at Faith on July 4, 1992 with wife Barbara on the right. (Photo courtesy Salisbury Post)

Local and state members of the Republican Party are remembering President George H.W. Bush as a man who cared more about the country than political party.

Bush, who served as the 41st president of the United States from 1989-1993, died Friday night at his home in Houston. He was 94 and the longest living president.

Jim Nance of Albemarle, now 67, was a delegate at the Republican National Convention in New Orleans in 1988. Nance said while the convention was fun, it was not one of the more memorable ones as it was not contested. Bush came into the convention as the sitting vice president.

“Everyone knew he was going to be nominated,” said Nance, who became active in the Republican Party at age 20. While at the University of North Carolina at Chapel Hill, Nance helped run Gov. James Holshouser’s campaign on campus during 1972.
Nance said Bush always impressed him. He was even a supporter when Bush campaigned against Reagan in the primary.

“I think President Bush is, without question, one of the greatest presidents in my lifetime,” Nance said. “The way he governed, the way he lived his everyday life with his family was important. He was one of these guys I felt could talk to anybody. I don’t think he viewed himself as anything special. I think he viewed himself as doing what was right for the country. A lot of decisions he made that hurt his re-election were decisions that helped the country. He was always out for the greater good of the country.”

The 1988 ticket of George H.W. Bush and Dan Quayle defeated Democratic challengers Michael Dukakis and Lloyd Bentsen. In Stanly County, Bush had a 64.13 percent majority, losing only 4 of 24 precincts.

Bush had slightly more than 50 percent of Stanly County’s votes in his defeat to President Bill Clinton in 1992.

Bush is remembered by many for helping lead to the end of the Cold War, liberating Kuwait from the Iraqi reign of Saddam Hussein and for the establishment of the Americans with Disabilities Act.

“I think the farther we go out the more respected this man’s going to be,” Nance said. “He didn’t say much about what he was doing, he didn’t take credit for stuff, he just let stuff happen.”

“I thought the world of him as a president and a person,” Smith, 85, said. “He’s a real hero in my book, very smart, very dependable.”

Smith’s wife, Phyllis, added that the couple attended a reception at the Bush home at Kennebunkport, Maine.

“He was a wonderful American and we’re going to miss him,” Phyllis Smith said.

Tributes came in from state political leaders as well.

“President George H.W. Bush was a true statesman dedicated to serving the country he loved and leading the charge for a more compassionate and united world,” said Gov. Roy Cooper. “We are grateful for his commitment to patriotism and public service. May his legacy inspire all of us to work toward a kinder and gentler nation, and may our thoughts and prayers bring comfort to his family.”

Cooper ordered flags to be lowered half-staff in honor of the passing of President George H.W. Bush.

“Last night we lost a great man,” NCGOP Chairman Robin Hayes said. “George Herbert Walker Bush was a man of honor and character. He is the true embodiment of the notion that public service is a noble calling, serving this country as a World War II aviator, Congressman, Ambassador to the United Nations, U.S. Envoy to China, Director of the CIA, Vice President under Reagan, and a term as the 41st President of the United States. My deepest condolences to the Bush family during this difficult time. I was privileged to personally know him, having visited the President and Mrs. Bush in their home. I hope the entire Bush family takes solace knowing that the country mourns with them, remembering him as the shining point of light he represented. Rest in peace, Mr. President.”

Regionally, Bush is remembered for his visit to the Rowan County town of Faith in 1992.

“It was an interesting experience,” said Cassie Coble of Albemarle. “I had always wanted to see a sitting president. My grandfather had saw Eisenhower in 1960.
“I got to shake Barbara’s hand,” she added. “It was one of the best Fourth of Julys I ever had.” 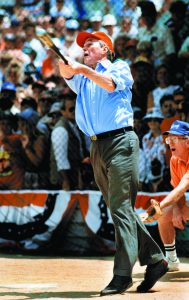 President George Bush came to the Faith celebration on July 4, 1992. He first played a short game of softball before speaking to the crowd. photo by Wayne Hinshaw, Salisbury Post

Ginger Trull posted on The Stanly News & Press’ Facebook page: “I’ll never forget that summer. I was playing Dixie Youth Softball and it was hot. After an early practice we headed to Faith NC. My Dad actually got to shake his hand and I got to see him throw a pitch on the softball field. I was in grade school and thought that was such an amazing day. My Dad my hero shaking the hand of the president of the United States of America.”

In a later message to the SNAP, Trull, who was 10 in 1992, elaborated that her father, Calvin, remembers wearing a red, white and blue hat in the style of Abraham Lincoln and President Bush calling him Mr. Lincoln when he shook his hand.

In a joint statement, former senators Elizabeth and Bob Dole called Bush a “cherished servant leader” and a “man for all seasons.”

Elizabeth served as the 20th United States Secretary of Labor during Bush’s single term as president.

The pair said they have fond memories of the president and his wife Barbara.

“We smile when we recall the photographs of President Bush and his beloved Barbara riding their bicycles as they forged new paths of friendship during their years in China or the skydiving adventures to celebrate his birthday,” they said.

The joint statement also praised the man for his work creating the Points of Light Foundation in 1990, an organization promoting volunteer work.

“He brought wisdom, a keen sense of mission and diplomacy, incomparable patriotism, along with compassion and humanity to each and every assignment he accepted on behalf of the American people,” the statement read. “… God bless this great man of faith and hold our dear friend close.”