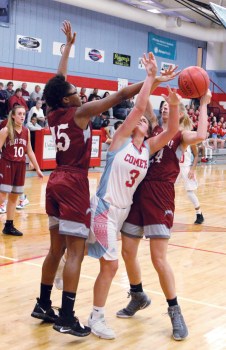 Gray Stone forward Seccora Medley goes for the block on North Stanly's Camille Shelton in the first half of Tuesday's game. (Photo by Charles Curcio) 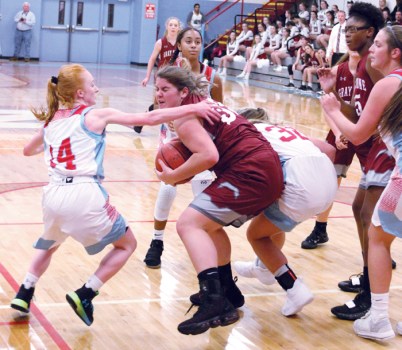 Gray Stone forward Danika Ray fights for a loose ball under the Comets' basket in the first quarter of Tuesday's game. (Photo by Charles Curcio)

The Comets led early on a Landis 3-pointer, but Gray Stone retook the lead with 3:43 left in the first quarter and never trailed again.

The Comets were also within nine with 2:09 left on a Landis bucket, but got no closer.

“Being able to extend offense based on what our posts are able to do rebounding and finishing gives us multiple shots when we are not on offensively,” Gray Stone head coach Robert Stack said.

“(Payne) got hot in the second quarter…that sparked us. Our ball movement was good,” Stack added.

Gray Stone steps out of YVC play Wednesday night at 6 at Mount Pleasant, then returns to conference play at home Friday against North Moore.

The Comets play West Stanly (1-2) Thursday at 6 p.m. The Colts won at home over South Stanly on Tuesday night.