Residents paid their final respects to Fetzer Hartsell Friday afternoon at Oakboro United Methodist Church.
Hartsell died Monday at age 92.
Prior to the service a few fellow elected officials remembered the man who served as Oakboro’s mayor from the early 1980s to early 1990s. 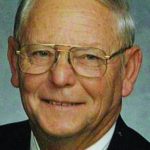 “He was certainly a fine man who served the town well during his tenure as mayor,” said Doug Burgess, who wraps up his term as mayor this month.
“He was dedicated to the veterans. He was still selling poppies this summer,” Burgess added. “Certainly a big loss to the town.”
Prior to public service, Hartsell served his country during World War II. He enlisted in the Navy at the age of 17. Serving in the Pacific Theatre, he received the Purple Heart from the sinking of the LCI 600.
“He was a good mayor. I really enjoyed serving with him,” said Roy Helms, who served two two-year terms on the council while Hartsell was mayor. “He had the town at heart. He tried to help the town all he could. He spent a lot of time down at city hall trying to do things for the town.”