South men bounce back with win over West Montgomery 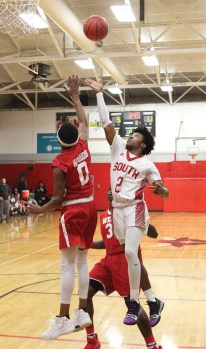 The Bulls' Jacorian LeGrande floats a shot in the lane in the first quarter of South's home win Friday. (Photo by Charles Curcio) 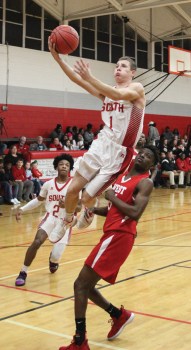 South's Justin Gaddy lays the ball up for two points in the first quarter of the Bulls' home win over West Montgomery. (Photo by Charles Curcio)

The South Stanly men’s basketball responded to Tuesday’s loss by scoring early and often in a blowout conference win at home over West Montgomery, 90-53.

T.J. Parker led West Montgomery (2-1, 0-1) with 19 points including the in the second half while Q.J. Drake added 12 points for the Warriors.

The Bulls’ 90 points in Friday’s win is the most for the team in a number of years. South got close to the point total in the final game last season, scoring 86 in a loss.

West Montgomery opened with five points in a row but went scoreless for the next four minutes of the opening period. South scored 16 points in a row and led by 20 after the first period, 26-6.

The Warriors got within nine in the second quarter before South stretched its advantage back to double digits late in the period. At halftime, the Bulls led, 38-26.

Over the first four minutes of the third quarter, South outscored West Montgomery 17-8; Gaddy’s bucket with 4:10 left in the period put the Bulls up, 55-34.

At the end of three quarters, South led 68-43 having outscored the Warriors 13-9 over the final portion of the third.

The Bulls emptied the bench in the third period but still outscored the Warriors 22-10 in the final period. Duncan McSwain’s layup in the final 10 seconds gave South 90 points for the game.

“We talked about attacking the basket. We have not shot the ball great the first four games,” South head coach Sean Whitley said. “Defensively, we really dug in…we have guys that can score. I told them in practice I knew we will score but we have to get stops. We are thinking, every time (the other team) has the ball, we are down one (point).”

South is scheduled to host North Rowan on Tuesday night. The Cavaliers won at home over Albemarle on Friday, 64-60.