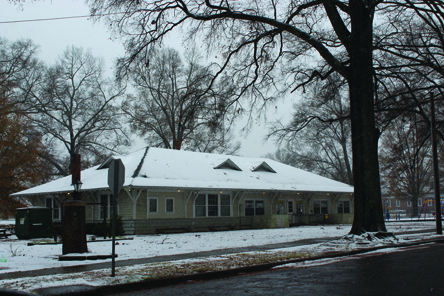 The YMCA Pavilion has a nice coat of snow from the storm.

Richfield and the northern part of Stanly caught the most of the precipitation on Sunday, according to James Morrow, a meteorologist with the National Weather Service in Raleigh. Richfield had up to three inches of ice, freezing rain and snow, with Albemarle only getting up to one inch of the same.

According to Brian Simpson, Stanly County Emergency Services director, approximately 6,000 to 7,000 residents were without power. Most of those outages came as high winds and ice caused a number of trees to fall, Simpson said.

Fortunately, he added, the county did not have many travel issues, “just a lot of trees down and power outages.” Simpson said the local fire departments and the Department of Transportation “were extremely busy with trees in the road.”

Road conditions are still not out of the woods yet, though, according to Morrow. With temperatures scheduled to drop into the mid-20s overnight on Monday, black ice, or melted water refreezing on roads, could be an issue.

Tuesday’s high is expected to be around 43 degrees, Morrow added, but again with lows dipping into the 20s, any melted snow can refreeze again on the roads causing more black ice. Stanly is not expected to receive any additional precipitation in the short term.

In Albemarle, at the peak of outages, approximately 1,500 customers were without power, according to City Manager Michael Ferris. He also said many outages were due to falling trees and tree limbs. Around 5,500 customers were affected.

Ferris added all of the city’s crews came in to work Sunday along with a couple of contract crews to help restore power. The first calls came in around noon on Sunday and the last known outages were handled by 2 a.m. Monday.

Albemarle’s customers “faired fairly well” in terms of having power restored county and state wide, Ferris said, which he added was a “huge benefit of public power.” Albemarle is one of two cities in North Carolina to have the RP3 award from the American Power Association for reliability in power service.

Union Power Cooperative services about 38,000 customers in Stanly, but as of Monday afternoon it was down to around 35 different locations with outages, according to Carrie Stroud, vice presidents for communications and marketing.

Stanly Community College and Stanly County Schools were both closed on Monday. A decision on Tuesday for SCS was expected around 5 p.m. Monday, according to superintendent Jeff James.

Stanfield and Aquadale elementary schools and North Stanly and West Stanly high schools remained without electricity as of mid-afternoon Monday.

Note: As of 4:45 p.m. Monday evening via Facebook, Stanly County Schools announced school will be closed for Tuesday.