US Army Reserve Band to perform in Locust 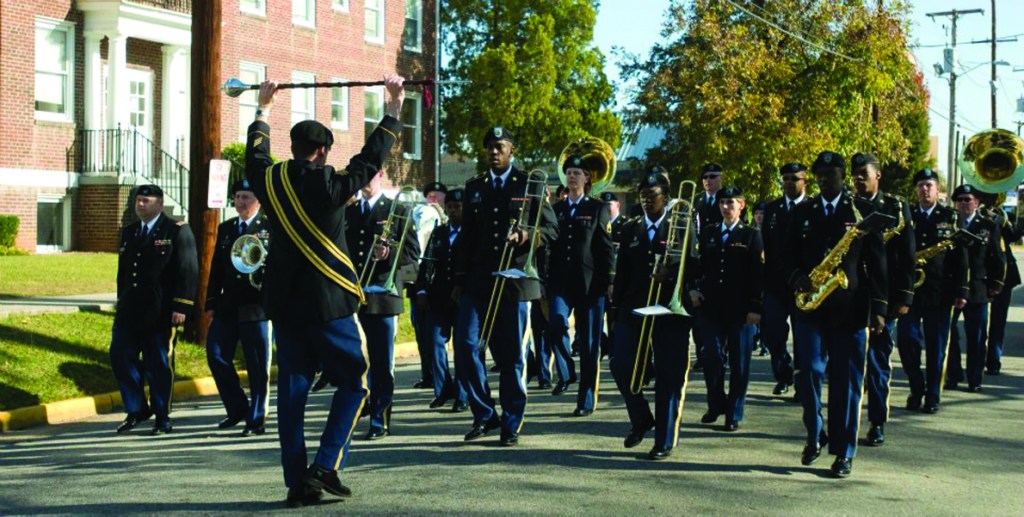 Contributed Members of the 208th Army Band, a United States Army Reserve Band stationed in Concord, perform concerts and parades throughout the year. Julia Robinson, a member from Stanly County, will be a part of the group performing Sunday night at First Baptist Church of Locust. Robinson says members of the band train just like any other reservist.

A local military band is heading to Locust for an encore performance of sorts.

The 208th Army Band, a United States Army Reserve Band stationed in Concord, performed at the 80th anniversary ceremony of the American Legion in Midland in September.

Many of the Legion’s members attend First Baptist Church of Locust. Once they shared the story of the band’s show, interest was shown in having it perform a Christmas concert for the church and its veterans.

“I was approached by one of our music ministry members, Shirley Mullis, about the availability of the band because her daughter, Julia Robinson, is one of the members of the band,” Nancy Focht, minister of music, First Baptist Church of Locust.

A performance is set for 6 p.m. Sunday at the church, 320 S. Central Ave. It is a free concert which will include holiday and patriotic selections. 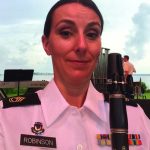 Robinson was recruited to become a member of the band, then stationed in Charlotte, when she was a band and orchestra teacher in Charlotte-Mecklenburg Schools.

“A grandparent of one of my students was the first sergeant of the band at the time and thought I would do well in the Army and in the band,” Robinson said.

“I had always wanted to join the military because my father had been a sergeant in the Army in Vietnam and I grew up listening to his stories about serving his country.”

To join the Army Band, Robinson says one has to pass an audition with the Army School of Music in Virginia or with the commander of the local unit.

“The audition process may involve a recording or in person audition,” she said.

“In addition to being proficient on your instrument, you have to pass physical and academics tests to join the Army.”

Shortly after joining, the band was deployed to El Salvador as part of Operation New Horizons, Task Force Santa Fe — a humanitarian mission following a hurricane.

“The band was there for four weeks and performed music for the local population and troops helping to rebuild the infrastructure,” she said.

The band, which covers the Southeastern United States and Puerto Rico, has performed concerts and parades at Walt Disney World, the Coca-Cola 600, Carolina Panthers’ games, in Washington, D.C., Myrtle Beach and at Veterans Day and Independence Day shows and parades.

“Every band member is a soldier first and musician second,” she added. “We have to meet all the Army standards and be proficient in our warrior tasks as well as musicianship. The band regularly participates in war exercises and rifle marksmanship on the M-16 in case we have to be deployed.”

Robinson, now with a rank of sergeant first class after 19 years of service, lives in Stanly County and is an emergency room nurse in Mint Hill when she is not active in the reserves.

She attended Stanly Community College and received her bachelor’s degree in nursing from Pfeiffer University.

“I thought it would be a great way to share the Christmas spirit with our community,” Focht said. “We’ve never hosted a concert like this at FBCL and I felt it would be well received. We have a lot of military veterans in our congregation and this is something they will wholeheartedly support. I am personally excited about this concert because I am originally from the Washington, D.C. area and grew up often hearing the many military bands that were stationed around us so I know how wonderful their concerts are.

“We are all looking forward to this holiday concert.”