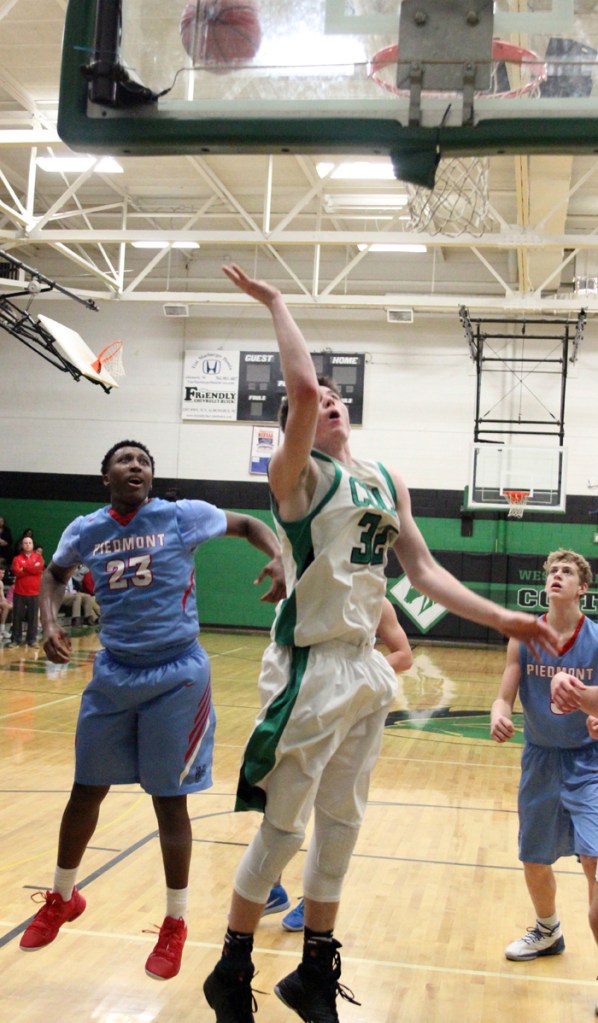 Trevor Kelly drives to the basket and puts a shot high off the glass in the third quarter of Wednesday's game. (Photo by Charles Curcio)

Josiah Hall led the Panthers (2-4) with 13 points, the most important of which came in the final 10 seconds of the game.

Down by one with 16.5 seconds left, Piedmont inbounded in front of the Panthers’ bench to Hall. He went around a high screen at the top of the key, drove to the basket and scored while drawing the foul. After a timeout, Hall made the free throw to put the Panthers up by two.

Nick Parker, who led West (4-2) with 22, had the ball in his hands in the final seconds. He tried to use a Hayden Greene pick, but when he turned back to the middle of the floor Hall knocked the ball lose. Before anyone got clear possession, the clock ran out.

Austin Medlin added 11 points while Greene was limited to nine, his first game of the season where the senior center did not score in double figures.

The first quarter was all West Stanly. The Colts hit 8-of-11 shots and limited Piedmont to 3-of-12 shooting, building an 11-point lead.

Both teams shot around the 50 percent mark in the third quarter, but Piedmont led the entire period. West got within three points two times in the third, but trailed after three 42-37.

The Colts kept the Panthers within three to five points for the first four minutes of the fourth but made a move in the final three minutes. Greene’s bucket with 2:43 left pulled West within two points, 49-47.

Piedmont kept possession of the ball for the next minute but failed to score, giving West a chance in the final minute. Medlin missed a three from the corner and the long rebound went out to Parker, who drained a three with 56.2 seconds left.

The Panthers missed on a shot on its next possession but double teamed Parker on the defensive end and forced a turnover, setting up Hall’s winning basket.

“We had a miscommunication on what we wanted to do that last defensive possession. I have to do a better job of communicating that to the guys,” West head coach John Thompson said. “(Piedmont) made the play at the end and we didn’t.”

Thompson added West outplayed Piedmont for three quarters but “that second quarter killed us. Our offense got stagnant and we gave up some offensive rebounds; that’s something we pride ourselves on.”