Charles Ray Cagle, 66, of Sanford passed away Tuesday, December 11, 2018 in his home. A private service to celebrate his life will be held at a later date. 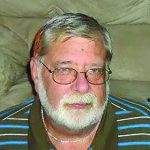