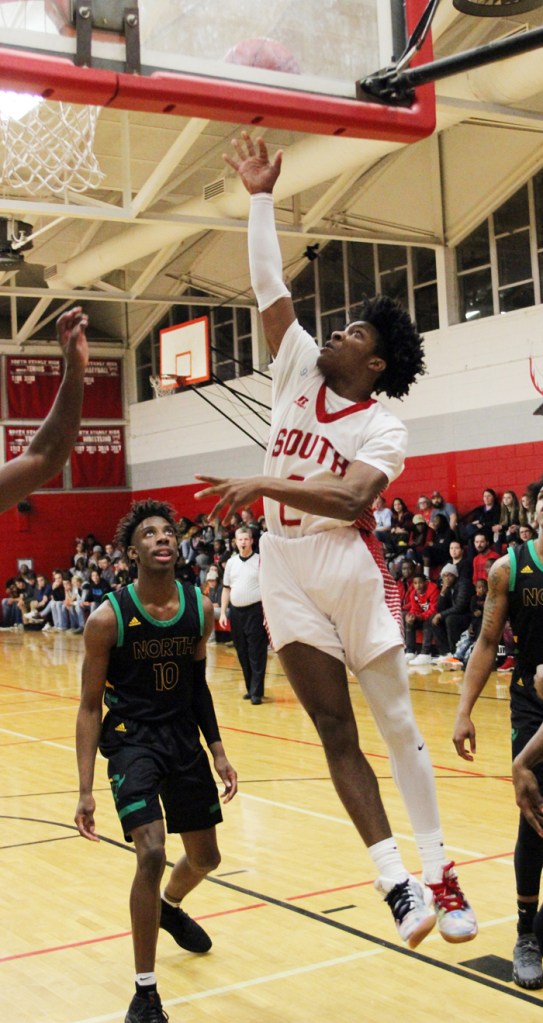 Jacorian LeGrand tries to connect off the glass for a bucket. He led South with 17 points in the Bulls' home game Thursday. (Photo by Charles Curcio)

Jacorian LeGrande led three in double figures for the Bulls (2-3, 1-1 YVC) with 17 points. Jaquez Cooke added 15 and Justin Gaddy had 13.

Dayjuwan Cooke scored 11 of his game-high 20 points in the second quarter for the Cavaliers (4-0, 2-0) and hit free throws down the stretch to put the game out of reach. Brevin Goodlet added 15 points, including seven in the first quarter, and a 6-for-8 performance at the foul line.

Bench points made a difference in the game for the Cavaliers. North Rowan’s bench outscored South Stanly 16-0, with the Bulls having just nine dressed for the game.

North played the game at a deliberate pace which limited South’s fast break opportunities and chances to score. The Bulls entered the game averaging 67.3 points per game, including 90 in South’s last performance, a home win over West Montgomery.

The two teams battled through a close tactical first half with North Rowan grabbing the momentum in the final four seconds with a Cooke four-point play. The Cavs led at halftime 32-29.

North continued to push the lead in the third quarter, hitting 6-of-13 from the field and leading after three by 10 points.

Dayjuwan Cooke’s bucket with 5:21 left in the game gave North its biggest lead, 56-44, but the Bulls answered with a 12-0 run over the next three minutes. Threes by Gaddy and Addison Tarlton started the rally for the Bulls. LeGrande hit a big three from the corner with 3:22 on the clock to get South within two, then Gaddy tied the game with a bucket at the 2:50 mark.

With the game tied at 56, Denario Robinson used his size advantage in the paint to get a one-handed shot to roll around the rim and fall to put the Cavs up by two.

North shut down South on its next possession but came down and committed a loose ball fall on a shot on the other end. Tori Colson made one free throw to get South within a point.

In the final minutes, Cooke hit 3-of-4 free throws and the Cavaliers defense came up with a steal in between trips to the line to seal the win.

“I think we forced it a little bit. Defensively we got out of rotation a few times,” Whitley said.

Regarding the late rally, Whitley said “our guys believe they can score … we don’t think we are ever out of a ball game … our big thing is digging in and getting stops. The 12-0 run doesn’t happen if we don’t gets stops on the other end … when we start playing with the same intensity on the defensive end as well as offense, we will be a really good ball team.”

He added South’s defensive plan “was to pack it in tight. (The Cavs) controlled the boards early, but I think we did a better job rebounding in the second half … (North Rowan) has athletes all over the place and attacks the boards.”