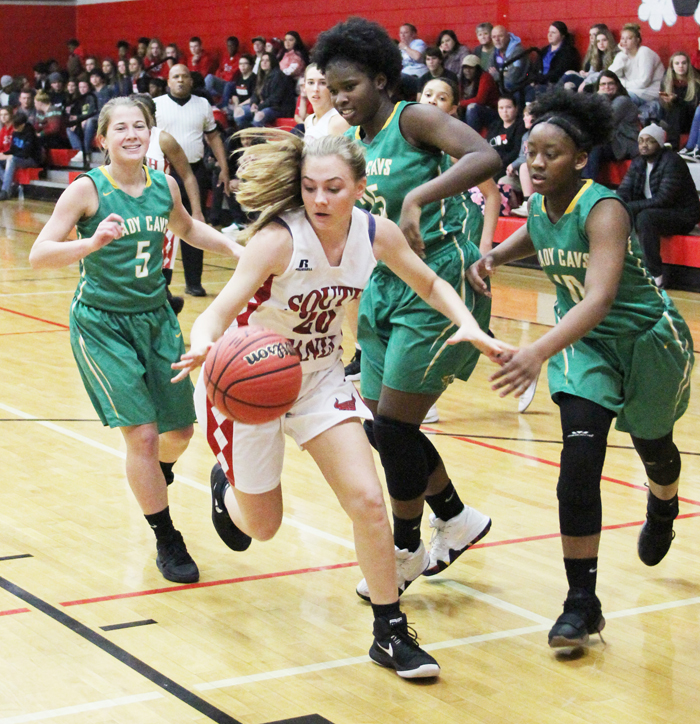 South Stanly's Keeli Crisco squeezes past three North Rowan defenders and scores in the first quarter of the Bulls' home game Thursday versus the Cavaliers. (Photo by Charles Curcio)

Natavia Taborn delivered in the fourth period for the North Rowan Cavaliers (2-3, 1-1 YVC), scoring 13 of her game-high 25 points in the final quarter.

North led on the first bucket of the game and did not have the lead again until the final 16 seconds of the game. South led by as much as eight points at the end of three quarters, but the Cavs opened the fourth with six straight from Taborn.

The Cavaliers’ Heather Freeman got open in the left corner in the final 20 seconds and drove to the basket, drawing a foul. She sank both free throws to put North Rowan up 42-41.

South turned the ball over on a traveling call seconds later and Taborn was fouled on the next play. She sank a free throw to give the visitors a two-point lead.

Down two, South got the ball into the frontcourt but Kimya Lynch knocked the ball out of bounds with 2.8 seconds left. The Bulls inbounded on the right side into Skye Shankle, who put up a shot while falling down that hit the right side of the rim short as the clock expired.