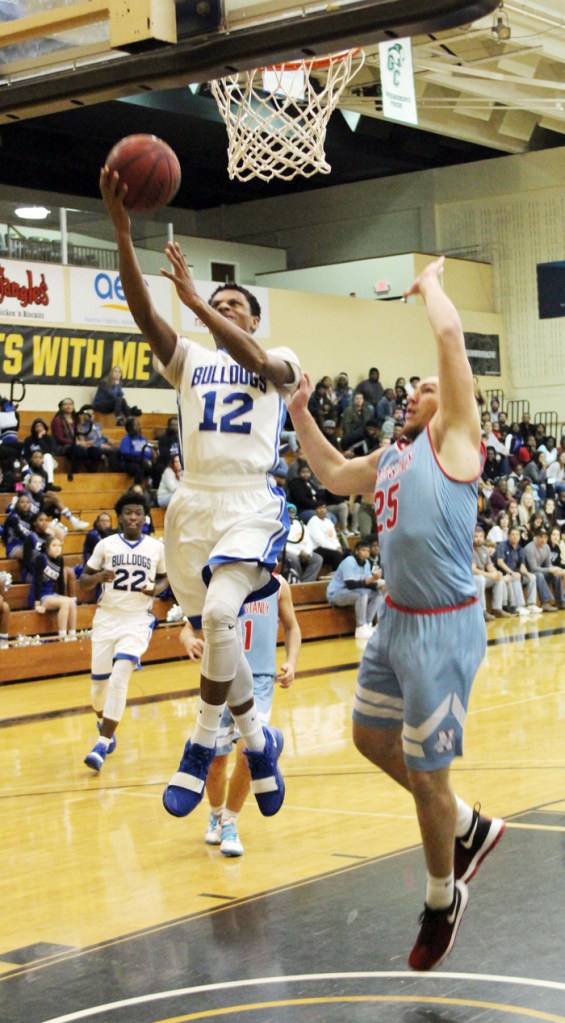 Ali Currie glides to the basket for a layup attempt for the Bulldogs in the second half of Friday's game. (Photo by Charles Curcio)

The Albemarle men’s basketball team made it two victories in the last three outings against North Stanly and stopped a four-game slide Friday with a 17-point win over the Comets at Pfeiffer University.

DeSean Horne scored 17 of his team-high 19 for Albemarle (2-4, 1-1 YVC) in the first half while Brandon Christian added 12 points for the Bulldogs. 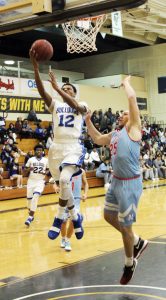 Ali Currie glides to the basket for a layup attempt for the Bulldogs in the second half of Friday’s game. (Photo by Charles Curcio)

The Comets were without center Nalik Veasley, who was ejected from last Thursday’s loss to West Stanly for bumping into an official. North also was short a starter with freshman Dyson Bell out due to illness.

Koby Poole’s bucket with 1:09 left in the opening period put the Comets up 13-7 before Horne scored five points in the final 50 seconds to get the Bulldogs within a single point.

Horne scored 12 of Albemarle’s 18 second-quarter points as the Bulldogs took a double-digit lead. Childress tried to get North within single digits with a layup at the buzzer which counted on a goal-tending call, putting the Comets behind at halftime 29-21.

North went four minutes without a bucket in the third quarter as Albemarle got back up by double digits early in the period and led by 12 after three, 37-25.

Early in the fourth, the Comets got within seven on a Lowder three and a Childress bucket, but Albemarle got buckets from Brandon Christian and Cameron Williams to match North’s offense.

The Comets battled back to within seven with 3:08 left on another Lowder three, but Christian answered for Albemarle with a two-handed dunk at the 2:51 mark.  Down the stretch, Malachi Baldwin and Marc Raye Jr. knocked down free throws when North was forced to foul. A late 8-0 Albemarle run put the game out of reach for North.

“The kryptonite for us has been missing free throws at the end of the game. In the last week since we played North Rowan, we have worked on free throws,” Albemarle head coach Marc Raye said.

Noting North was down two players in the game, Raye added: “I would rather have a win with everyone having all their pieces so no one can say we won because they didn’t have certain players. At the end of the day, I’m happy with our effort.”

The Bulldogs will be on the road for two games before the Christmas holiday. Albemarle goes to North Moore on Tuesday and West Stanly on Thursday.

North Stanly faces the Colts at home Monday and goes to 3A Concord the next night.