Albemarle's Armani Baldwin puts up a jumpshot in the corner in the second half of Friday's win over North Stanly at Pfeiffer. Baldwin led the Bulldogs with 17 points. (Photo by Charles Curcio)

The Albemarle women’s basketball team added to the team’s strong start to the 2018-19 season with a 60-29 win over North Stanly Friday night at Pfeiffer University. 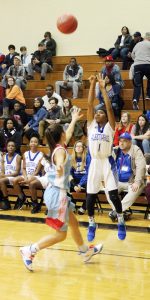 Albemarle’s Armani Baldwin puts up a jumpshot in the corner in the second half of Friday’s win over North Stanly at Pfeiffer. Baldwin led the Bulldogs with 17 points. (Photo by Charles Curcio)

Armani Baldwin scored 15 of her game-high 21 points for the Bulldogs (6-0, 2-0 YVC) in a first half in which Albemarle outscored North by 23 points.

Zycoria Tillman scored in double digits for the sixth time in as many games this season, adding 16 points for the Bulldogs. The senior guard now has 916 career points and is approaching the 1,000-point club for the school; she would be the fifth women’s basketball player in Albemarle High school history with 1,000 or more career points and the fourth such player since the 2011 season.

Albemarle opened the game using a pressure defense to force turnovers which turned into layups for Baldwin and Kiana Ridley in an 8-0 run over the first 1:31.

North answered with a Taylor Burleson three and Payton Landis bucket to cut the deficit to three. The Comets trailed 10-7 with 4:35 left before Albemarle went on a 12-2 run over the rest of the opening period to lead after one, 22-9. In the first quarter, the Bulldogs were 8-of-17 from the field.

In the second, North went cold, hitting 1-of-9 from the field. Albemarle scored the first nine points of the period over the first six minutes and led by as much as 23 in the quarter.

The Bulldogs got contributions from five players in the third quarter and extended the lead further, building a 27-point lead after three.

Both teams went to the benches in the fourth as the Bulldogs outscored North by four in the final period for the game’s final margin.

“Everything for us comes from defense. When we do that, we are pretty good,” Albemarle head coach Eric Davis said.

Regarding the team’s six-game win streak, one of Albemarle’s best starts in recent memory, Davis said “every day we just focus on the game…we have a great group of seniors who since freshman year we have counted on heavily. They deserve a great year.”

The Bulldogs play at North Moore on Tuesday night and at West Stanly Thursday. North Stanly hosts West Stanly on Monday then travels to Concord Tuesday.