ASHEBORO — Dr. W. Allan Edwards, 80, of Asheboro passed away on Monday, December 17, 2018 at Wesley Long Community Hospital.
He was born in Union County, NC on September 8, 1938 to J. Benton Edwards, Sr. and Lillian Inez Thomas Edwards. He attended and graduated from New Salem High School in 1956. 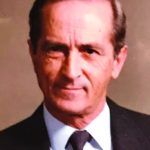 He received his Bachelor of Science Degree and Masters Degree from NC State University and a Doctorate of Education Degree (Ed.D) from Nova University.
Dr. Edwards taught Vocational Agriculture for 4 years at Grantham School in Wayne County. His Ag Team won first and second place in judging contests locally and at the state level. He came to Randolph Industrial Education Center to run the Agricultural Business Technology Program.
He was the former President of The Optimist Club where he was named Optimist of the Year.
While at RCC Dr. Edwards was the Evening Director and Dean of Instruction. In 1982 he was awarded the Outstanding Administrator and was later named Vice-President.
From 1991-1993 he served as a Board of Director for the Asheboro/Randolph Chamber of Commerce and in 1993 he served as Vice-President of Community Development.
While in the Asheboro Rotary Club he served as a weekly newsletter writer and was named a Paul Harris Fellow.
He was a member of Central United Methodist Church where he served on the Finance Committee. In earlier years, he served on the Finance Committee at Grace United Methodist Church.
In 1999 he retired from RCC to go back to his farming roots where he raised pure-bred black angus cows.
He loved his two daughters and granddaughter. He loved to watch their sporting events and especially loved to see his granddaughter cheering.
He is survived by his wife, Patricia Austin Edwards; daughters, Denise Edwards and spouse of Randleman and Allanda Edwards and husband Gerard of Greensboro; granddaughter, Arissa Cooper of Raleigh; sisters, Martelia Carroll of Greensboro and Lois Hill of Oakboro; and brothers, John Edwards of New Salem and Clay Edwards of Helena, AL.
In addition to his parents, Dr. Edwards was preceded in death by his sister, Helen Edwards and brother, J.B. Edwards, Jr.
Funeral services will be held on Thursday, December 20, 2018 at 11:00 am at Central United Methodist Church, 300 South Main Street in Asheboro, with Fred Huffstetler and Dr. J.F. Howard, Sr. officiating. The family will receive friends following the service until 1:15 pm in the Family Life Center at the church. Burial will be held on Thursday at 3:00 pm in Oakboro Cemetery.
Memorials may be made to the Dr. W. Allan Edwards Scholarship Foundation, c/o Randolph Community College, 629 Industrial Park Ave., Asheboro, NC 27205 or Central United Methodist Church, 300 South Main Street, Asheboro, NC 27203.
Pugh Funeral Home in Asheboro is serving the Edwards family.
Please share remembrances and condolences at www.pughfuneralhome.com.