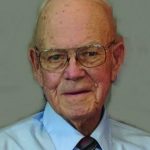 The family will receive friends at Stanly Funeral and Cremation Care of Locust on Thursday evening from 6 until 8 PM.
Born February 14, 1930 in Cabarrus County, NC, he was the son of the late Millard Adam Tucker and Lizzie Lou Kiker Tucker.
He was a retired machinist and a member of Herrin’s Grove Primitive Baptist Church. He was a veteran of the US Army during the Korean Conflict and he loved to hunt and fish.
Mr. Tucker is survived by his wife Doris Hathcock Tucker of the home, daughter Susan Blalock (Jimmy) of Albemarle, sons Robert Tucker (Diane) of Norwood and John Tucker of Stanfield, sister Betty Mullis of Locust, 7 grandchildren, and 5 great-grandchildren.
A daughter, Sherry Diane Vanhoy, preceded him in death in 1992.