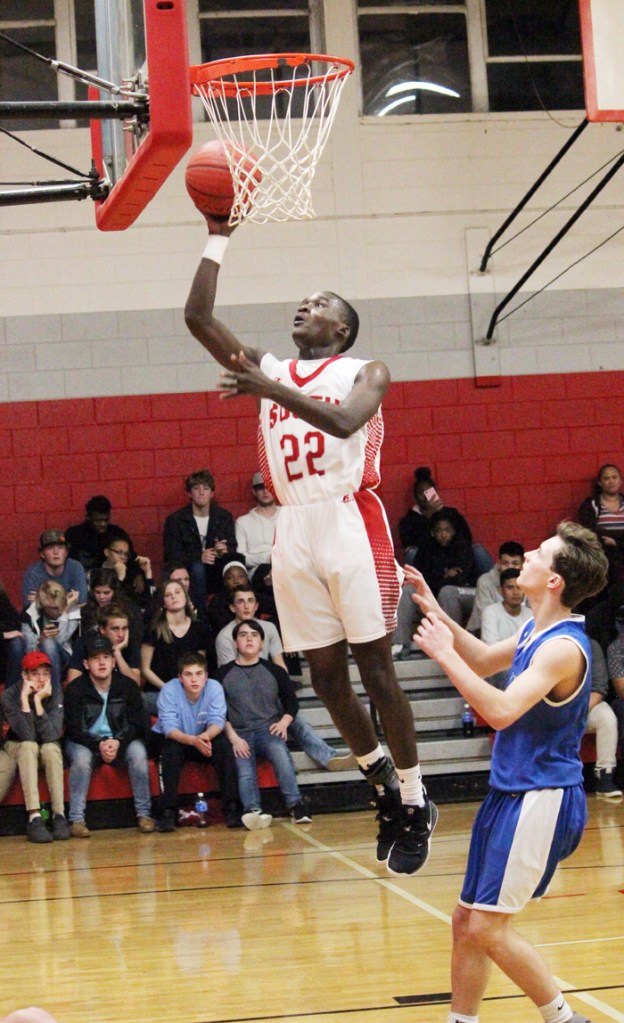 South's Tori Colson drives the baseline for two of his team-high 16 points in the Bulls' win Friday. (Photo by Charles Curcio)

Tori Colson led four in double figures for the Bulls (4-3, 3-1 YVC) with 16 points, including 10 in a third-quarter which saw South outscore the Eagles by 10.

Jacorian LeGrand added 15, including hitting 6-of-8 for the game from the free-throw line. Jaquez Cooke added 12 and Justin Gaddy had 11 for the Bulls. South also got eight from starter Addison Tarlton.

Carson Brady was the top scorer for Uwharrie Charter (1-7, 0-2) with eight.

South ended the first quarter with a 7-0 run over the final 1:07 to take a seven-point lead after the first period, 19-12. The Bulls extended the lead in the second period and led at halftime 33-22.

In the third, South opened with an 8-0 run over the first 2:48 of the period and led by double digits the rest of the way. Both teams substituted liberally in the fourth, with Lowder scoring nine off the bench for South.

“Tori did everything we’ve been asking him to do; space the floor well, attack the basket and rebounds. That’s where he’s going to get his baskets,” South head coach Sean Whitley said.

“We played the best full game we have this year defensively,” Whitley added.

After Wednesday’s game at East Rowan, the Bulls are off until 4:30 p.m. on Dec. 26 at the Laurie Anne Cruse holiday tournament at Mount Pleasant. At the tourney, South takes on Central Cabarrus.