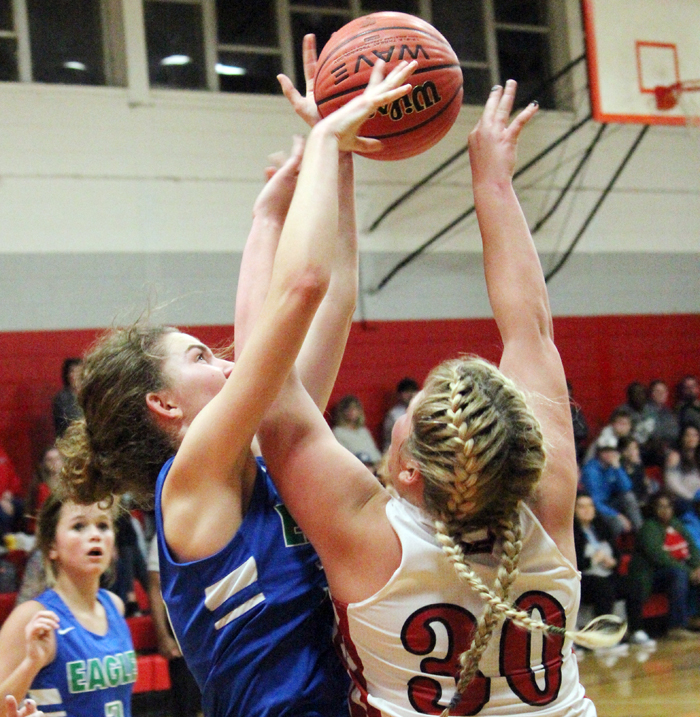 South Stanly's Sadie Lee goes for a shot in the lane in the second half of Tuesday's home win over Uwharrie Charter. (Photo by Charles Curcio)

The South Stanly women’s basketball team evened its conference record and moved a game over the .500 mark overall with a 10-point home YVC win Tuesday night over Uwharrie Charter, 47-37.

Mattie Hinson and Sadie Lee each scored 11 to lead the Bulls (4-3, 2-2 YVC). Hinson scored six of her 11 in the second half while Lee came off the bench and score nine of her points in a third quarter in which South outscored the Eagles by eight. 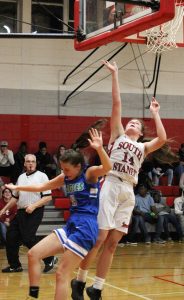 South’s Mattie Hinson goes the basket for two of her 11 points in Tuesday’s win over Uwharrie Charter. (Photo by Charles Curcio)

The Eagles led by as much as seven with 2:44 left in the second quarter before baskets from Kalea Legrand and Hinson got the Bulls within three just before halftime, 18-15.

Trailing by five midway through the third, South went on a 9-0 run, including five points from Lee and buckets from Legrande and D’Nysia Wall. Lee added another triple and a free throw to put South up 32-27 after three quarters.

Uwharrie never got closer in the fourth quarter than seven as the Bulls went on to the victory.

“Defense was the key, getting a hand up. Those girls can shoot; they have three shooters from the outside,” South head coach Scott Stevens said.

The Bulls will play at 3 p.m. Wednesday in the opening round of the Laurie Anne Cruse holiday tournament at Mount Pleasant. South faces the Community School of Davidson Spartans.