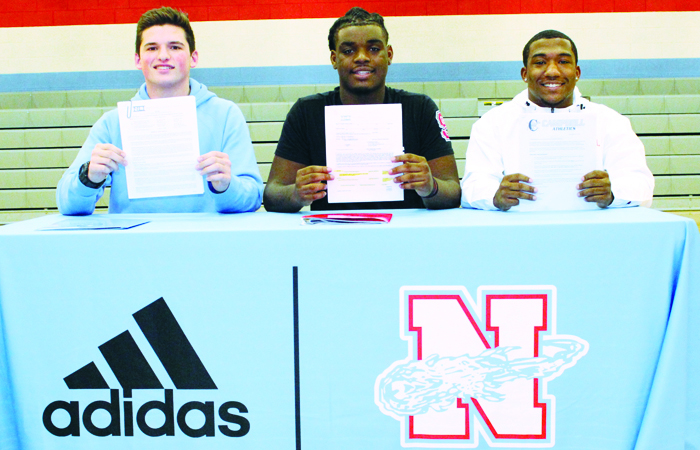 On Wednesday morning, three seniors at North Stanly High School signed their national letters of intent to play football at the next level, signing with three NCAA Div. I programs.

C.J. Clark, a defensive lineman with the Comets, will join the N.C. State Wolfpack next season, playing for the same team for whom his cousin, current New York Giants lineman, B.J. Hill, played in college.

Cameron Davis, who has the record at North Stanly for most career rushing touchdowns as well as the longest touchdown run from scrimmage for a Comet player (99 yards), will be in Buies Creek next season at Campbell University.

Drew Little, one of the top rated longsnappers in the country according to the Rubio Camp index, will join returning head coach Mack Brown at the University of North Carolina at Chapel Hill.

Following in the footsteps of his cousin in the NFL, Clark brings his 6-foot, 3-inch, 290-pound frame to the field for the Wolfpack.

Clark said the recruiting process was tough and was a tough decision, but he made his decision back in June to go to State.

“I felt like it was a good school, was home. It was a better fit for me; the coaches and I had a good relationship,” Clark said.

Hill’s time with the Wolfpack helped influence the decision for him as well, Clark said, saying the two had talked about the school.

“He told me good things about it,” Clark said.

Having players from Stanly in the National Football League like Hill, Indianapolis Colts’ defensive lineman Denico Autry and the Pittsburgh Steelers’ R.J. Prince have inspired Clark to want to follow in their footsteps.

“It’s motivation because I know that if they can do it, I can do it,” Clark said.

He added he looked forward “to coming in and making a big impact, doing what’s needed to do “(for the program).”

The newest member of the Div. I BCS Camels, Davis said Campbell gave him the best opportunity in terms of scholarships, but the school was also a better fit for him.

“The coaching staff are all nice and have been good to me; everyone gets along well. Campbell is like family … that’s the main part for me,” Davis said.

The North running back said he looked forward to playing in college and staying at the running back position. In his career with North Stanly, Davis had 6,146 rushing yards, second all-time in school history behind current Carolina Tar Heel senior Antonio Williams. Davis scored a North Stanly-record 92 touchdowns in his career and had 97 overall including receiving and special teams.

Davis said he will take the love and support he got from people at North Stanly with him as he moves forward to the next level. In particular, Davis mentioned Comets head coach Scott Crisco, along with his father, North assistant coach Forrest Davis Jr. and his grandfather, Forrest Davis Sr., as major influences in his life and career.

“They helped me strive to go higher,” Davis said.

The new Tar Heel longsnapper talked about the amount of time involved in learning the specialized skill, saying it took “countless hours night and day to get where I am.”

Little added he did not spend time on the weekends with his friends, but instead attended camps and talked to college coaches.

“I was putting in that grind to get where I am. It’s harder than most people think it is,” Little said.

He credited his coaches and family for helping to get him to the next level of football, adding his father Chad, an assistant coach with North, and mother Rebecca “spent money for me to go to (camps) … it played an awful big role in getting me into college.”

This season, Little was one of the top tacklers on the North team at linebacker as well as long-snapping punts and kicks for the Comets.

What Little will take with him from North Stanly to Carolina, he added, are “friendships and becoming a leader on and off the field.