Joseph (Joe) Robert Ombrello passed away at the Glenn A. Kiser Hospice House on Tuesday, December 18, 2018 at the age of 62.
Joe was born to his late father Joseph M. Ombrello and his mother Rita M. Turin on October 10, 1956 in Marquette, Michigan. 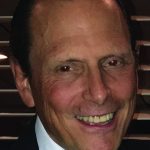 Joe is lovingly remembered by his wife Judy A. Ombrello, son Joseph R. Ombrello JR, step-sons Brandon R. Heilman and Garth M. (Carleen) Heilman, brothers Francis M. Ombrello, David A. Ombrello, and Richard S. Ombrello, step-sisters Tammy Jackson, Lisa Brown, and the late Dawn Cochran and his step-mother Sarah Ombrello.
Joe graduated high school in Sidney, Ohio in 1975. He went on to earn a Bachelor of Science in Business Management from Youngstown State University in 1979.
He worked as the Director of Operations of Industrial Products at Columbus McKinnon in Charlotte.
Joe enjoyed playing his guitar, riding his motorcycle, sailing, and spending time with his wife at the beach.
The memorial service will be held at First Lutheran Church at 230 S. Second Street, NC, 28001 on Saturday, the 5th of January at 2:00 P.M.
The celebration of life will be held at Lori’s Lounge (behind C&A building), 136 Collins Ave, Norwood NC 28128 at 4:00PM until 8:00PM
In lieu of flowers donations may be made to Novant Health Hospice at 1229 Statesville Boulevard, Salisbury, NC 28144 or the Hospitality House of Charlotte at 1400 Scott Avenue, Charlotte, NC 28208. Condolences for the family may be offered online at www.carolinacremation.com