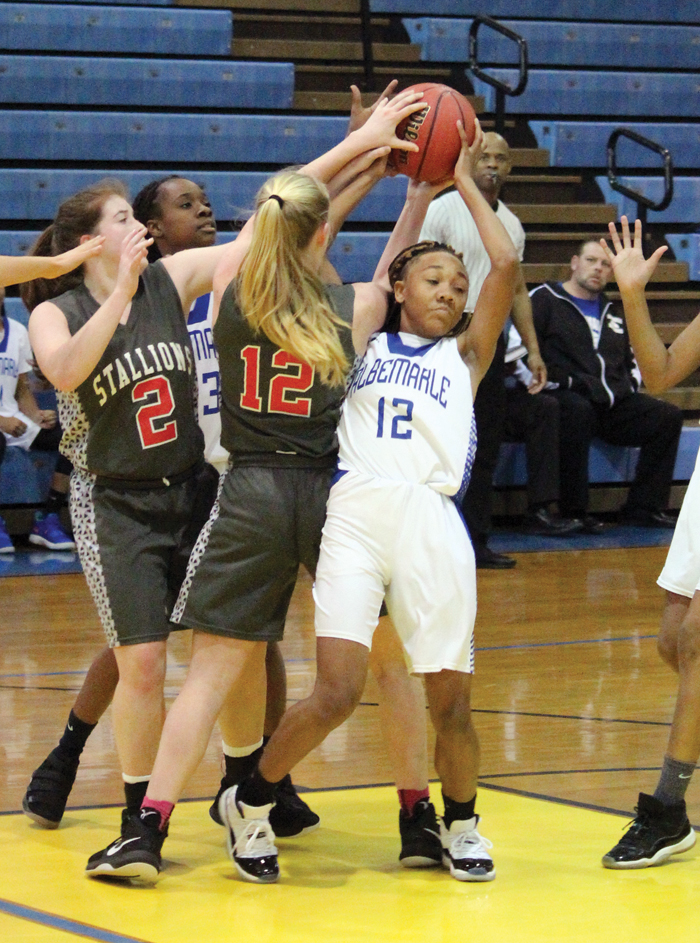 Albemarle’s DeShada Wall battles for possession of the ball in the second half of the Bulldogs’ win.

Albemarle continued the program’s strongest start to a women’s basketball season in recent history on Wednesday morning with an easy 63-26 win over the Greater Cabarrus Stallions.

The win for the Bulldogs came in the opening round of the Laurie Ann Cruse holiday tournament hosted by Mount Pleasant High School.

Albemarle won its first six games in the 2008-09, the last season the program had started with a prolonged win streak.

Armani Baldwin had a big first half for the Bulldogs (9-0) scoring 17 of her game-high 21 points in the first two quarters.

Deshada Wall added 17 points for Albemarle scoring 13 in the second half.

Liv Griffin was the leading scorer for the Stallions (1-8) with 12 points.

Albemarle connected on 26 shots in the game, including five makes from the three-point arc and 6-of-11 at the free-throw line.

The GCAA Stallions had only 10 buckets overall in the game, none of which were three-pointers. From the foul line, the Stallions were 6-of-14.

Referring to Baldwin’s play, Albemarle head coach Eric Davis said she “has worked hard. She is always out working…she had a great summer against somer very good competition. She’s come in with that kind of mentality of being aggressive and we need it. We have a very unselfish group.”

The Bulldogs are scheduled to take on Concord Thursday at 3 p.m. in the semifinals. The Spiders won over Sun Valley, 37-30, on Wednesday in the first round of the tournament.