Aleene Lassiter Morgan died on Friday, Dec. 21 at her home in Albemarle, surrounded by loving family members. She was 100 years old. Born on October 10, 1918, she faced a life often filled with near Dickensian hardship, yet she only grew stronger with each challenge. She never became bitter, only better, and the struggles informed one of her trademark life mottos: Buck up. A gifted athlete who was once offered a college basketball scholarship, Mrs. Morgan instead left high school only a few months shy of graduation in order to help 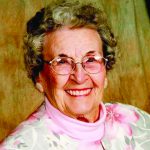 financially support her parents and siblings. She had a beautiful voice and would often sing snippets of songs in answer to questions, or just because she felt happy. Mrs. Morgan also had a sharp wit and was a wonderful story-teller. Aleene Lassiter met Robert Morgan in January 1940. Three months later they were married, and 10 months after that, their first child together was born. Eventually there would be nine children, 18 grandchildren, 21 great-grandchildren and, so far, two great-great-grandchildren. With the exception of a few brief periods while her husband served in the U.S. Army, Mrs. Morgan was a lifelong North Carolinian, living all but her final 12 years in the Charlotte area. A devout Jehovah’s Witness since her baptism at age 16, Mrs. Morgan lived every day her faith’s commitment to respect and love for all, thus proving to be the ultimate Witness. She worked many jobs, starting with a paper route as a teenager – held under her older brother’s name because girls were not allowed to have routes. She was a member of the opening staff at the first W.T. Grant store in downtown Charlotte. There also were jobs in hosiery mills and carbon plants and school cafeterias – anything that would pay a little bit and offer her a schedule flexible enough to care for her growing family. Because that was her calling: Family. Rearing nine children revealed not only her extraordinary capacity for unconditional love, but her seemingly endless patience, good humor and selflessness. About 50 family members gathered in October at Morrow Mountain State Park to celebrate 100 years of love from this exceptional woman. Many wrote “love letters” detailing the ways in which she’d impacted their lives. She enjoyed listening to those letters be read to her again in her final days. Toward the end, she spoke near-constantly of her family, both in general and specifically. “I love each and every one of you as much as the next. God’s great gift to me is my loving children and I hope they love me forever.” They absolutely will. Everyone fortunate enough to have known Aleene Morgan is vastly richer for her presence in their lives, and this world is now infinitely poorer for her absence. Services will be held Friday, Dec. 28 at Forest Lawn West, 4601 Freedom Drive. Visitation begins at 11 a.m., with a chapel service at 1 p.m., followed by a graveside service. After services, the family will gather at the Thomasboro/Westchester neighborhood home where Mrs. Morgan lived the majority of her adult life and reared her family. Her youngest surviving son now owns and lives in the home. Mrs. Morgan is preceded in death by her parents, two brothers and one sister, her husband of 44 years, Robert L. Morgan Sr., and three of her children: Faye Holton, Jean Dennis and Wood-row Morgan. She is survived by three of her five daughters and three of her four sons: Robert L. Morgan Jr. (Joanne) of Indian Trail, Sylvia Randle (Bill) of Albemarle, James H. Morgan Sr. (Diane) of Charlotte, Bruce W. Morgan (Nancy) of Charlotte, Virginia (Ginger) Morgan of Matthews and Alice P. (Pat) Morgan Stoda (Greg) of Palm Beach Gardens, FL. Also mourning are her numerous grandchildren and relatives, as well as innumerable others for whom she was an inspiration, a role model, a surrogate mother and a remarkable friend. The family would especially like to thank Hospice of Stanly & The Uwharrie for the outstanding care provided to their mother in her last 6 months of life.
In lieu of flowers, donations should be made to Hospice of Stanly & The Uwharrie, 960 North St, Albemarle, NC 28001 (https://hospiceofstanly.org); Stanly County Senior Center Nutrition Program, 283 N. Third St., Albemarle, NC 28001; or Jehovah’s Witnesses (https://www.jw.org).