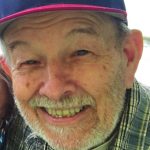 follow in the church cemetery. The family will receive friends one hour prior to the service in the church fellowship hall.
Mr. Smith was born February 21, 1934 in Stanly County to the late Grover and Virginia Tucker Smith. He was a veteran of the US Army and a member of Porter Baptist Church. He was a retiree of Wiscassett Mills.
He is survived by his wife of 60 years Violet Hopkins Smith of the home. One son, Ron Smith (Tammy ) of Stanfield. Three daughters, Sheila Smith Biles (Rick) of Norwood, Phyllis Smith Morgan (Jonathan) of Candor and Sandy Smith Ward (Bobby) of Norwood. Two sisters, Barbara Smith Whitley (Don) of Oakboro and Gail Smith Morton of Norwood. Ten Grandchildren and Eight Great-Grandchildren.
He was preceded in death by a brother Rayvon Smith.
Online condolences to edwardsfuneralhomes. com.