Bulldogs move to 10-0 with overtime win over Concord 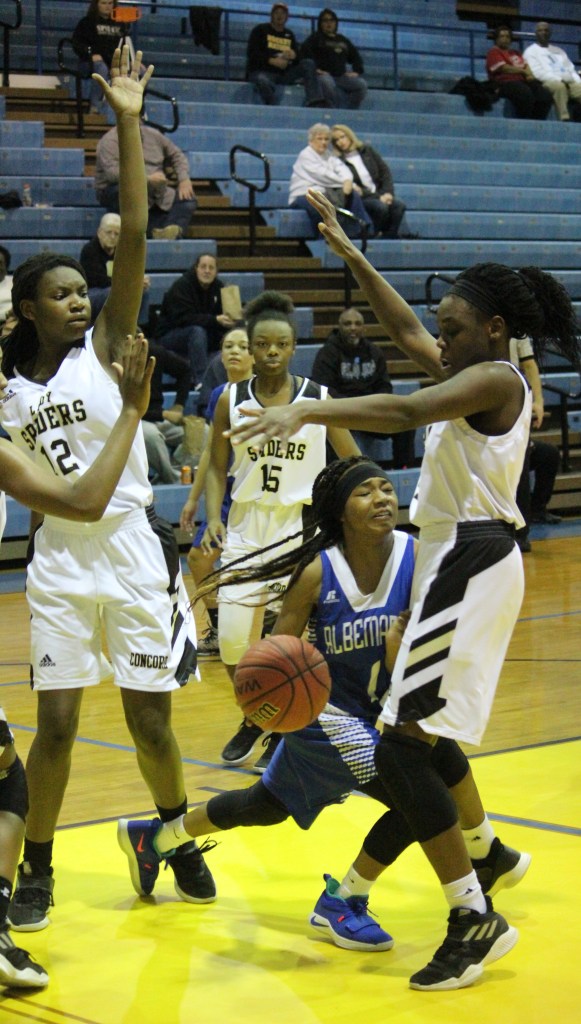 Albemarle's Armani Baldwin fights for room in the late between two Concord defenders in Thursday's game. (Photo by Charles Curcio)

The closest game the Albemarle women’s basketball program has had this season came Thursday in the semifinals of the Laurie Ann Cruse holiday tournament. The Bulldogs pulled away late in overtime for a 69-64 win over the 3A Concord Spiders to stay perfect on the season.

Tameya Newton led four in double figures for the Bulldogs (10-0) with 17 points including 11 in a 25-point second quarter for Albemarle. Armani Baldwin and Krystin McLendon each added 11 for the Dogs while Deshada Wall scored 10 off the bench. 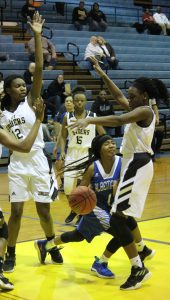 Albemarle’s Armani Baldwin fights for room in the late between two Concord defenders in Thursday’s game. (Photo by Charles Curcio)

Albemarle got off to a slow start in the game, trailing 14-3 after six minutes of basketball, having missed seven shots to start the game. The Bulldogs rallied in the final 1:23 of the first with a 9-0 run to get within two points of the Spiders at the end of the quarter, 14-12.

Trailing 17-15 early in the second, threes from Kadajah Little and Newton, along with a McLendon steal and layup, over a 30-second 7-0 run gave the Bulldogs the lead, forcing a Spiders timeout. Albemarle led by as much as 14 in the period, outscoring the Spiders by 14 and leading by 12 at halftime, 37-25. In the second quarter, Albemarle hit 7-of-12 from the 3-point arc and 9-of-21 overall from the field.

Concord slowly chipped away at the lead in the third when the Bulldogs went cold from the field. Albemarle was 3-of-14 in the third while the Spiders hit 7-of-16 and outscored the Bulldogs by 11 to get within one point at the end of the period, 46-45.

With both teams in the bonus, free throw shooting grew in importance as the game reached the end of regulation. McLendon gave Albemarle a 56-54 lead with two foul shots with 5:12 left, but Concord answered minutes later. Buckets from Stevenson and Akeya Wallace put the Spiders up 58-56 in the final three minutes.

Baldwin got Albemarle within one point with a free throw with 2:31 left, then seconds later Wall got an offensive rebound and hit a layup to put Albemarle back in front 59-58. The Bulldogs ran some clock in the final minute, then missed a shot and fouled the defensive re-bounder Chambers. Chambers missed both foul shots and the Bulldogs cleared the rebound. Zycoria Tillman missed a layup in the final four seconds and the clock ran out, sending the game to overtime.

Baldwin hit back-to-back buckets with two minutes left in overtime to give Albemarle a two-point lead, 65-63. Leading by one after a Concord free throw, the Spiders were forced to foul Wall and Tillman in the final 30 seconds; both hit all four of their free throws leading to the Bulldogs’ win.

“We work hard every day; conditioning is a big part of what we do,” Albemarle coach Eric Davis said. He also credited his bench’s strong play in the game after the Bulldogs had foul trouble in the game. Two players (Little and McLendon) eventually fouled out in the fourth quarter.

Davis also talked about the team’s 10-0 start for the season, saying his players “are just focused. They have worked so hard; they put in so much work and they have that trust. When Concord went on a run, they didn’t get far away from what they do.”

The Bulldogs take on the winner of South Stanly and Cox Mill Friday night at 6 p.m.