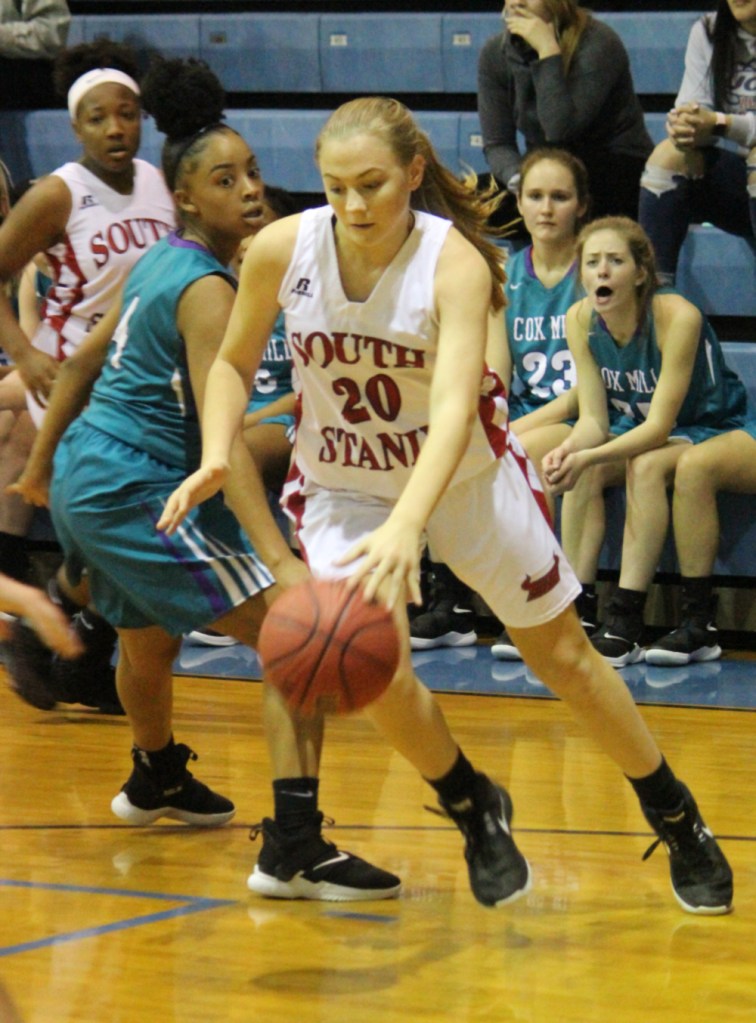 South's Keeli Crisco drives the baseline in the first half of the Bulls' matchup with Cox Mill Thursday. (Photo by Charles Curcio)

The South women’s basketball squad fell to 5-6 on the season with a loss to the Cox Mill Chargers in Thursday’s semifinals of the Laurie Ann Cruse holiday tournament at Mount Pleasant.

Mattie Hinson led the Bulls with seven points while being in foul trouble for much of the first half.

Kayla Smith led three in double figures for Cox Mill (6-6) with 13 points, including nine in the first half.

Cox Mill shot a higher percentage from the field in the game than South as well as making more baskets overall. The Chargers were 24-of-70 from the field (34.3 percent) and 5-of-20 at the free-throw line.

Cox Mill opened with a 7-2 run over the first four minutes of the game. South got within three points on a bucket from D’Nysia Wall, but the Chargers pushed the lead back to five after one quarter. The Bulls turned the ball over nine times in the opening quarter.

South got within a single point midway through the second period with two free throws and a bucket from Tanaya Harris before the Chargers went on a 6-0 run, forcing a Bulls timeout. Cox Mill outscored South 9-4 over the final four minutes of the half to lead the Bulls 27-15 at halftime.

The Bulls hit just 1-of-13 shots in the third quarter as the Chargers continued to build the lead in the period, leading by 18 after three quarters, 35-17.

Cox Mill pulled away further from South in the fourth quarter, getting 10 points from Kelsey Holmes off the bench en route to the game’s final margin.

South will play in the third-place game Friday at 4:30 p.m. against the Concord Spiders, who lost in overtime to Albemarle in the tournament’s first semifinal, 69-64.