If you were lucky enough to know Joe Kluttz, you were lucky enough.
Joe was born to Elizabeth West Kluttz and Joseph Ransom Kluttz, Sr. of Albemarle, NC on May 21, 1938.
After a two-week stay in the hospital, Betty Kluttz brought her first-born son home to the Kluttz Cottage on Pee Dee Avenue with a full time nurse for another two weeks. He must have been a handful. 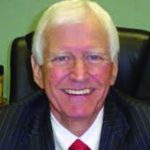