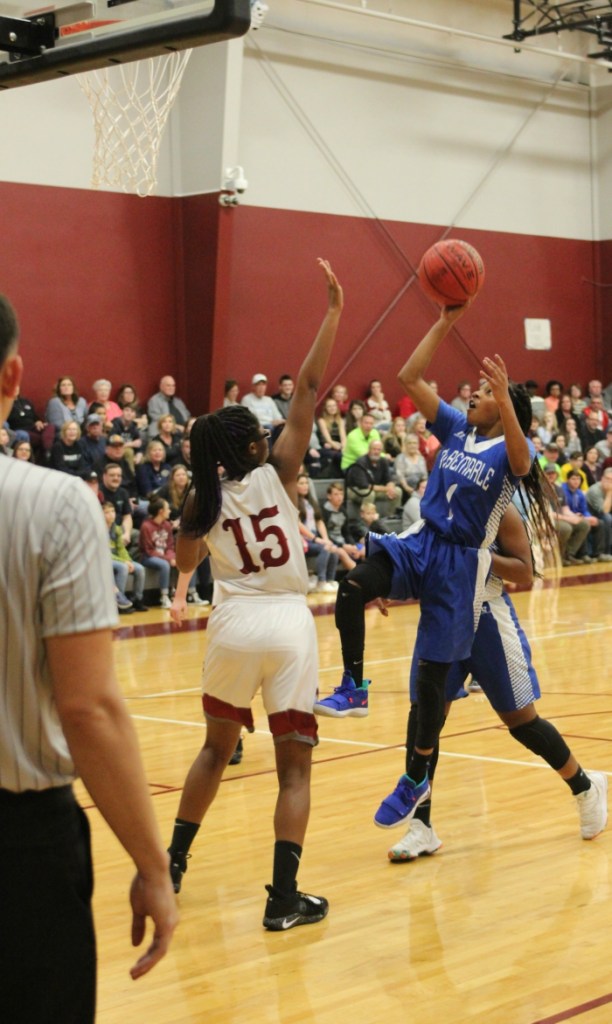 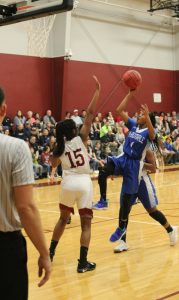 The Albemarle women’s basketball team survived a serious challenge to the team’s undefeated conference mark Friday night, rallying in the final four minutes for a 57-54 road win at the Gray Stone Knights.

Gray Stone shot a higher percentage overall from the field, but the Bulldogs had the advantage both from 3-point distance and at the free-throw line.

Gray Stone jumped out to a 6-2 advantage early, but the Bulldogs ended the first period outscoring the Knights 13-6 over the final four minutes of the first quarter, including back-to-back threes from Newton in the final two minutes. Albemarle led after one quarter by three, 15-12.

The Bulldogs led by as much as nine early in the second quarter before the Knights started chipping away at the advantage. Gray Stone outscored Albemarle 10-1 over the final 3:29 of the first half to pull into a 30-30 tie at halftime.

Gray Stone scored the first six points of the third period and outscored the Bulldogs by three points in the quarter to lead by three, 44-41.

The lead went back and forth in the fourth. Tillman put the Bulldogs up with 7:02 left in the game with a 3-pointer, only to see the Knights go on a 6-0 run over the next three minutes. A Werts’ triple with 4:22 left gave Gray Stone a 51-45 lead.

Back-to-back baskets from Kiana Ridley pulled the Bulldogs within two points, 51-49, but the Knights twice built the lead back to three in the final three minutes.

Trailing by two with 1:32 left following a Knights miss on offense, Baldwin drove the baseline past a fallen Gray Stone defender, scored the layup and drew a foul. Her free throw put the Bulldogs up by one, 55-54.

Gray Stone turned the ball over and was forced to send the Bulldogs to the line. Albemarle missed four free throws in a row and the Knights got the chance to retake the lead.

After Tillman added one free throw, Danika Ray had a chance to tie the game with 20 seconds left but missed on a jumper from the side and the Bulldogs cleared the rebound.

On the next possession Newton was fouled by Olivia Payne and the referees deemed it an intentional foul, giving the Bulldogs two free throws and possession of the basketball. Tillman made 1-of-2 shots before the referees found a correctable error in that Newton should have been the free-throw shooter. Newton also made 1-of-2 foul shots and the Bulldogs led by three.

On Newton’s miss, a wild scramble for the ball went to Albemarle. Baldwin missed a shot and the Knights rebounded with a chance to get a final shot off.

However, the long outlet pass for Gray Stone went out of bounds at the other end of the court as the clock ran out.

“They are a tough group; they’ve got a special level of fight this year,” Albemarle coach Eric Davis said.

“We are not going to go through the playoffs beating people by 30; these are games for us to get better.”

Davis said the core players on the team are “very hard to rattle…(rallying from down six) shows the maturity of this team.”

The Bulldogs coach added Baldwin “is playing at another level this year. Even if she struggles offensively, on defense she plays at a high level.”

Albemarle will host the South Davidson Wildcats (6-6, 4-1 YVC) on Tuesday in a battle for first place in the conference standings.