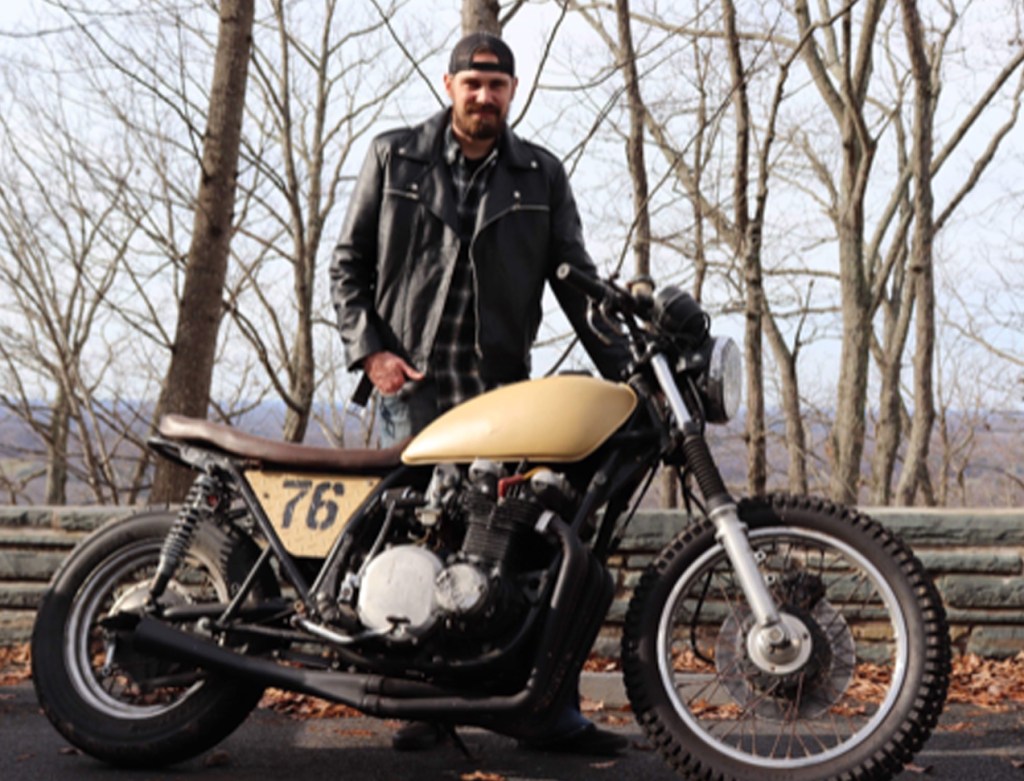 Brandon M. Miller, 30, stands beside his vintage Kawasaki motorcycle while at Morrow Mountain State Park, Dec. 29, 2018. Minutes after leaving the park, he was killed in a crash.

Friends of a motorcyclist killed in a crash turned the incident into positive fuel for helping others.

Ethan Helms helped organize the Look Twice Save a Life motorcycle ride Saturday afternoon in honor of Brandon Miller, a 30-year-old who died Dec. 29, 2018 when his 1976 Kawasaki collided with a 2005 GMC Sierra pickup driven by Penny Harkey, 56. Police say she was turning into a driveway at the time of the crash. ( https://www.thesnaponline.com/2018/12/31/motorcyclist-killed-in-crash/ )

“He’s one of those that if you had a bad day you’d have a smile on your face before he left,” Helms said of Miller. “He’d give you the shirt off his back, man.”

Helms said 147 motorcycles were confirmed to have participated, with estimates of around 400 individuals riding in remembrance of Miller, who was employed by East Albemarle Towing. The company was also there in support with a couple of its vehicles.

The event took riders from Hwy. 55 Burgers Shakes & Fries in Albemarle to the scene of the crash and on to Morrow Mountain State Park, where Miller had just visited before his death.

Riders then ventured back to Hwy. 55 for a meal, where 10 percent of the lunch’s proceeds were to go toward Miller’s funeral expenses. Waitresses also offered to donate a percentage from tips to the fundraiser.

Victor Patel, owner of the Hwy. 55 franchise, knew Miller since he was a child. The news of his death came as a big shock for Patel.

“He was always helpful, always being helpful for anyone,” Patel said. “We just had that relationship, if I needed anything, Brandon was there.”

Patel said he has never seen a staff work as hard as his did Saturday afternoon.

“It was definitely heart-warming to see so many people show up.”
Helms, who has only ridden for around eight months, said the crash hit close to home for him and others.

“We all have close calls and stuff,” Helms said Saturday night upon reflection of the day’s ride and mission.

He said having known Miller made organizers want to make others aware of the dangers motorcyclists face.

Helms says the ride will be an annual event.

Donations from the first event will go to Miller’s family, with $12 of each $20 T-shirt sold going to it.

“Brandon was just an amazing guy and we appreciate all the support that came out for Brandon,” Helms said.