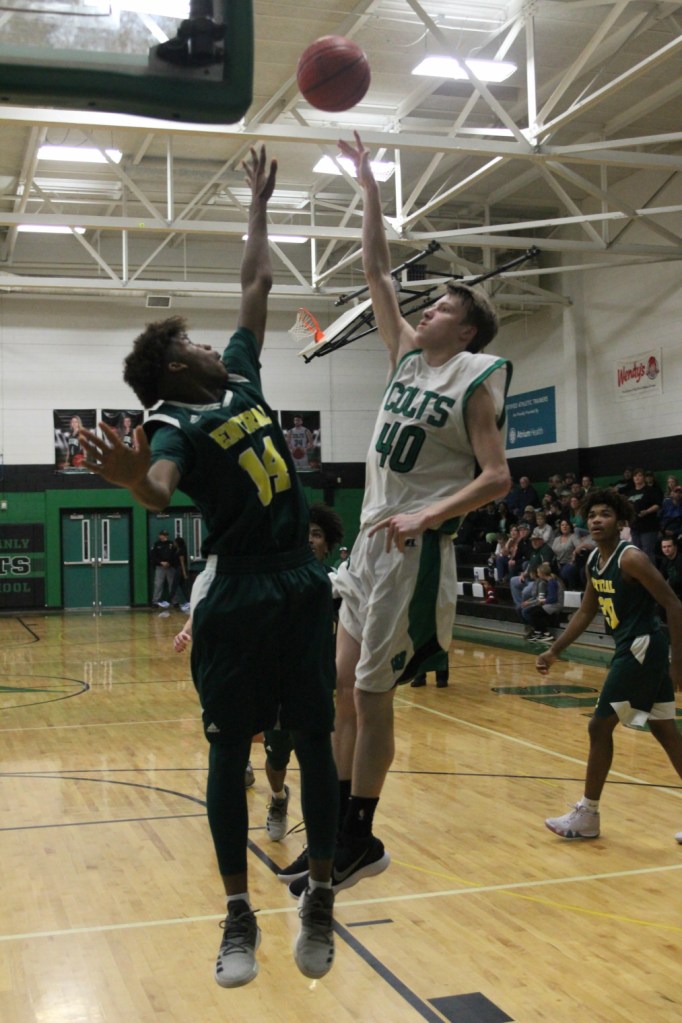 Austin Medlin goes for a high floating shot over the defense of the Vikings' Jelahni Austin in Saturday's game. (Photo by Charles Curcio)

Despite missing two starters in the lineup, the West Stanly Colts men’s basketball team kept Saturday’s non-conference game with Central Cabarrus close, but the Vikings pulled away late for a 20-point win, 78-58.

West (6-6) was led by Austin Medlin who finished with 26 points including 9-of-9 at the free-throw line.

The Colts were without starting center Hayden Greene, who suffered a slight knee injury in practice last week, along with guard Nick Parker, who is nursing a shoulder injury.

Nasim Fuller paced the Vikings (4-10) with 23 while Christian Cornish added 19.

The Vikings opened with a 12-0 run over the first 4:12 of the game before Medlin got the Colts on the scoreboard a minute later.

Medlin scored all 12 of the Colts’ points in the first half and got West within two with a triple with 37.8 seconds left.

David McCallum pushed the lead back to five for Central with a trey in the final nine seconds of the opening period.

West fought back in the second quarter to lead midway through the period on a Medlin bucket.

One minute later, Colton Austin’s basket with 2:42 left gave the Colts the lead for the final time in the game, 26-25. The Vikings scored six points in the final two minutes to lead at halftime, 32-28.

Central’s offense exploded in the third quarter as the Vikings hit 10-of-18 shots and outscored West by 11 to lead by 15 at the end of three quarters, 58-43.

In the fourth, the Vikings outscored West 14-2 over the first two minutes and led by as much as 26 in the quarter. The Colts narrowed the gap late with eight points in the final three minutes for the game’s final margin.

“I was proud we fought back and took the lead,” West coach John Thompson said.

“Except for a two-minute stretch in the third quarter we were right there. Part of that was fatigue and part was inexperience with the guys we had in there.”

Regarding Medlin’s play, Thompson said he “puts in a lot of time on his own. He’s in the gym shooting every morning; the other guys all have confidence in him.”

West returns to action Tuesday to open Rocky River Conference play at home against the No. 2-ranked 2A team in the state, the 11-2 Forest Hills Yellow Jackets.